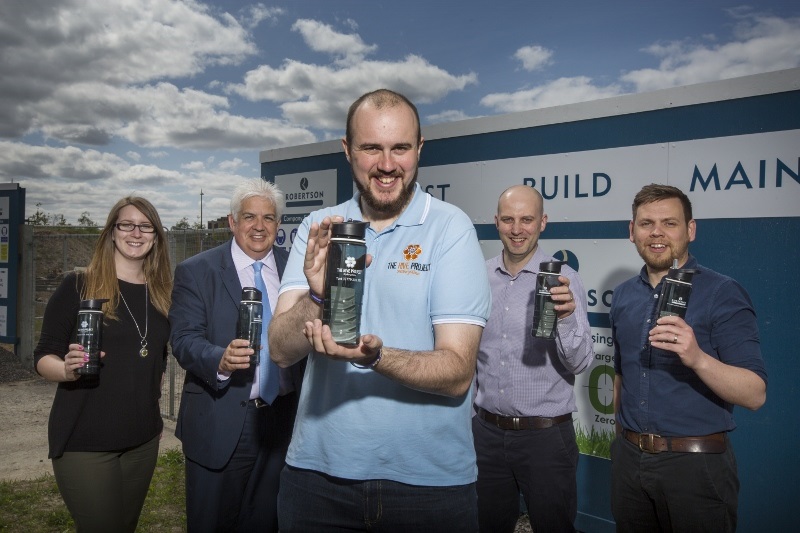 Robertson is selling reusable water bottles to its employees, subcontractors and wider supply chain, with 100% of the money raised being donated to the Mikeysline charity. A group of local Robertson employees will also be carrying out improvement works at the Inverness premises of Mikeysline, as well as taking part in awareness raising and fundraising activities at several of their sites.

In return, Mikeysline carried out ‘tool box talks’ with the site teams during Mental Health Awareness Week and will be attending ‘Curry and Chaat,’ a stress awareness raising event Robertson are hosting for 40 local staff and subcontractor employees.

Frank Reid, Managing Director, Robertson Northern said: “It’s really important to Robertson that we are an open and supportive company that recognises and discusses mental health among our employees. Supporting Mikeysline is one of many things we are doing to demonstrate our commitment to mental health awareness.

“Across Robertson, we will be hosting mental health awareness sessions for business leaders and managers as well as training dedicated mental health first aiders this year. We also have ‘BeSupported,’ a 24/7 support line for any employee or family members suffering with mental health issues.”

Mikeysline founder, Ron Williamson, is thrilled to have an organisation the size of Robertson as a supporter. Ron Williamson, Founder of Mikeysline and The Hive Project, said: “Having companies such as Robertson on board and taking an interest in the work of our charity really spurs us on.

“It’s vital that mental health issues in the workplace are recognised by both staff and management. By adopting Mikeysline & The Hive Project as the chosen charity here in the North of Scotland, Robertson is demonstrating its commitment to the wellbeing of their employees and the community in general. We can’t thank them enough.”