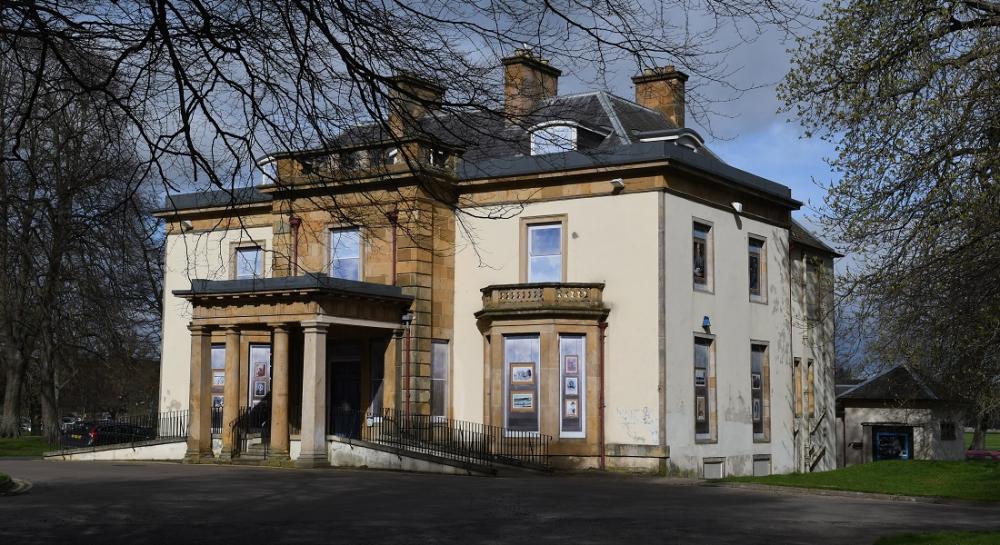 On 26 July we passed the fifteenth anniversary of the unexplained fire at Grant Lodge, which put an end to its use as an heritage and archival centre.

Ever since that fateful day, the Lodge has sat, boarded-up and neglected.  From time-to-time, Moray Council has carried out its duty of care to maintain the fabric of the building wind and watertight.

More recently, panels were fitted to the boarded-up windows, the Lodge now in effect a Potemkin village, to disguise the fact that the building is lying unused.  These panels display old photographs and pictures of local characters from Elgin and around.

The Grant Lodge Trust, GLT, was set-up in 2014, after the Lodge had been dropped from the pioneering Castle to Cathedral to Cashmere project in 2013.  A further plan was also thwarted at the last minute, despite the fact that funding for redevelopment of the Lodge had been fully sourced.

The Trust is now pleased that some progress can finally be reported.  An application to LEADER for funding has been successful!

Grants are awarded by Local Action Groups to projects that support delivery of a Local Development Strategy.

The funding that GLT has secured is to employ a project manager for eight months in order to generate a business case to be submitted to Moray Council as part of a Community Asset Transfer (CAT) request.

Or, in other acronyms, LEADER is funding GLT’s CAT application to TMC…

If successful, the CAT application would allow GLT to take a long lease on Grant Lodge.  Once that lease was granted then the Trust would be in a position to start raising funds for full restoration.

One potential fly in the ointment for any proposed redevelopment of Grant Lodge is that in the Deed of Gift, Sir George Cooper presented Cooper Park and Grant Lodge as a “free gift to the Community of Elgin” and that the Lodge and grounds should be for the “use and benefit of the inhabitants of Elgin”.

These terms are quite specific and would presumably rule out any commercial use unless they can be altered, which may be essential for a sustainable future.

The original use, under the Deed, was to be as a Public Park, Library and Reading Rooms and a Museum of Arts.  (The latter never came to fruition.)

The sticking point in former proposals for regeneration has always been the fact that the Deed of Gift would have to be varied by approaching the Court of Session in Edinburgh.  There is obviously a cost for this, which has previously been estimated at around £30-40k.

That is a bridge yet to be crossed!

More information on Grant Lodge, including a brief history and timeline, is available on the website of the Friends of Grant Lodge: www.grant-lodge.org.uk