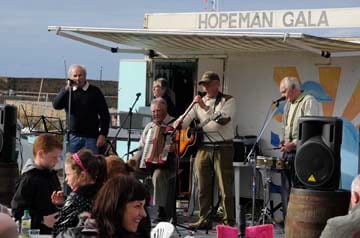 Hopeman Gala is set to welcome visitors from across Moray and beyond as it celebrates its 44th year next week.

The theme for this year’s Gala is ‘Something Old, Something New!’, with a programme of over 40 events catering for all age groups and tastes.

Gala favourites such as the popular fancy dress parade, sandcastle competition and tombola night will all return, as will the iconic Hopeman Harbour ‘Folk and Fish Night’, where some of the region’s most talented musicians will perform in an open-air venue, next to the harbour.

New to the programme for 2018 will be a Science afternoon which promises rockets and explosions,  a ‘nerf wars’ battle and stand-up comedy courtesy of Breakneck Comedy, headlined by comedian Graham Mackie.

The village also appointed two Young Citizens as part of the celebrations; Kelly Price and Erin Hepburn, who were chosen for their youth leadership and charity work over the last 12 months.

Gala Convenor Lindsay Nelson commented, ‘We’re really excited to have Breakneck Comedy supporting us this year. We’ve seen how popular other comedy nights have been in Moray and we wanted to bring some of that laughter to the Gala. We’re used to seeing people with a smile on their faces during Gala week and I’m certain that comedy night will bring us even more of that.

Lindsay continued ‘along with our stunning location, it’s the people of Moray that make it the best place to live. They can be assured that they’ll be offered a warm welcome from both all those serving on the Gala Committee and those that live in the village alike’.

A full programme of events for Hopeman Gala, which runs from 13th-21st July, can be downloaded at hopemangala.co.uk

Breakneck Comedy tickets are available now for Friday 20th July from Hopeman Stores and Costcutters for £10 pp and are over 18s only. Booking enquiries can be made through hopemangala@gmail.com