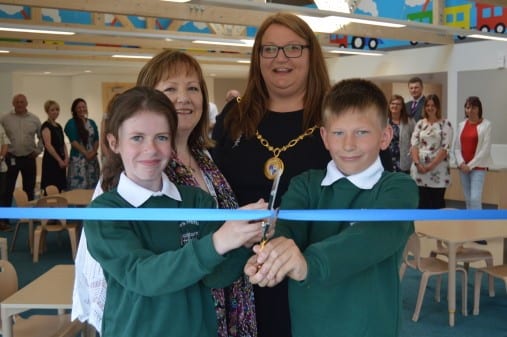 A £2million extension to Milne’s Primary School has been completed.

The five-classroom, 6,800 sq ft building was completed on budget, and will welcome new pupils and nursery children in the new school year.

Keys for the building were handed over to the chair of Moray Council’s Children and Young Person’s Committee, Cllr Sonya Warren.

At the handover and ribbon-cutting ceremony Cllr Warren said she was delighted to see the new building finished.

“It’s marvellous to see this extension completed; it’s transformed the school and the provision for our young people in Fochabers,” she said.

“Building a sympathetic extension to a listed building, and retaining its functionality, is always a challenge but I’m delighted to see the results. It looks fabulous and I’m sure the nursery and school pupils will enjoy their time in it.”

The new extension, which received equal funding from Moray Council and the Scottish Government, will allow the school’s 200 primary-aged pupils and 20 nursery children to all be taught within the same building.

Following the completion of the extension, the second phase of the project will see the existing nursery school demolished during the school holidays. In its place a new play area and outdoor amphitheatre will be created.

She said: “I’m thrilled to see the progress of the building works here at Milne’s Primary. Over the last 10 years both my children have attended this school, and I’ve previously been Chair of the Parent Council, so it’s very close to my heart.”