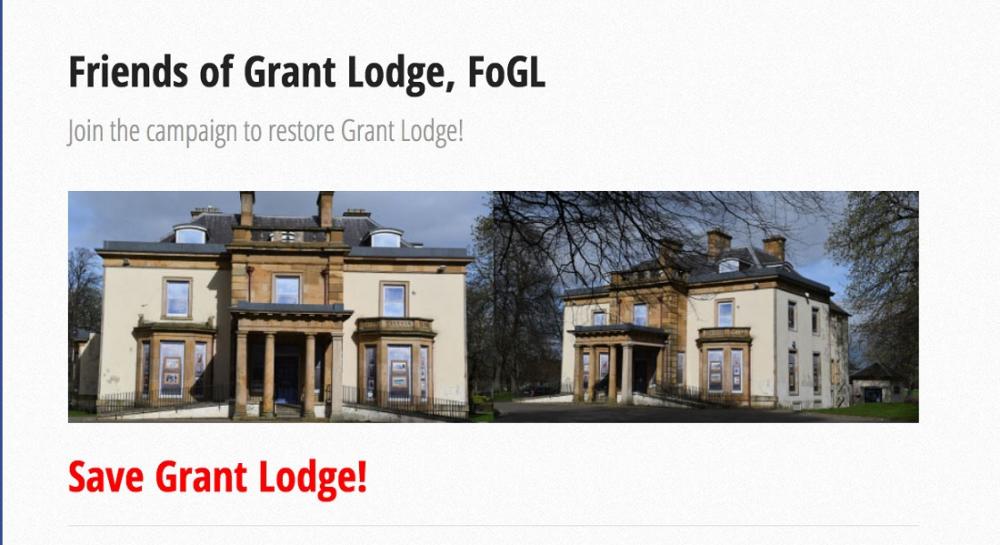 The Friends of Grant Lodge have been working hard this year to try and keep the plight of the Lodge in the public eye.

It is now seven years since the group was established in 2011, following a public meeting.

Friends of Grant Lodge is a pressure group, with the objective of returning Grant Lodge into community use in line with the intentions of Sir George Cooper who granted a Deed of Gift creating a Public Trust of Grant Lodge and its grounds in 1903.

The grounds were to be used as a park (‘Cooper Park’) and the Lodge as a “Public Library and Reading Rooms and a Museum of Arts and Industries for the use and benefit of the inhabitants of Elgin”.

Friends of Grant Lodge member Stuart Huyton says: “We will keep raising the issue of Grant Lodge with The Moray Council who are the trustees charged with the responsibility of adhering to the terms of the Deed of Gift but who have been unable to find a solution to bringing it back into use since the fire in 2003.

“To that end, a new website has been created, which provides information about the Lodge and the campaign to save it.  There is also a news section and a timeline giving details of all the major events from the commissioning of the Lodge by Sir James Grant for his aunt, Lady Innes, in 1750, right up to the present day and the fifteenth anniversary of the fire in July 2003, which has just passed.

“There is a link to an interesting black and white film, on the website of the National Library of Scotland, of the opening day of Cooper Park and Grant Lodge on 19 August, 1903.  It was a huge event at the time and this can be seen by the footage of the procession and crowds marching along the east end of the High Street towards the Lodge.”

On Christmas day 1903 the Northern Scot published an article about the opening in its end of year review: “Undoubtedly the leading event in Elgin during the year now almost gone has been the opening of the Cooper Park and Grant Lodge.  The magnificent Park, along with the fine old mansion of Grant Lodge, which stands within its grounds, is the gift of a son of Elgin, Mr George Cooper of The College, to the citizens of Elgin.

“The Park opening took place on the 19th August, 1903, and was quite a gala day in Elgin.  There was a general holiday, and the streets were gaily dressed.  A large procession was organised, consisting of various public bodies, which marched from the west end of the town along High Street to the Park, where an enormous crowd had assembled to witness the ceremony of the formal handing over of the Gift by Mr Cooper to the town.  In handing over the titles to Provost Young, Mr Cooper said that his idea in presenting this Park to Elgin was for the use entirely of the inhabitants and for no other purpose.”

The Friends of Grant Lodge Annual General Meeting will be held on 25 September at 7pm in the Elgin Museum Hall.  Members of the public are welcome to attend.

The Friends of Grant Lodge always welcome new members and details of how to join can be found on the website at www.grant-lodge.org.uk