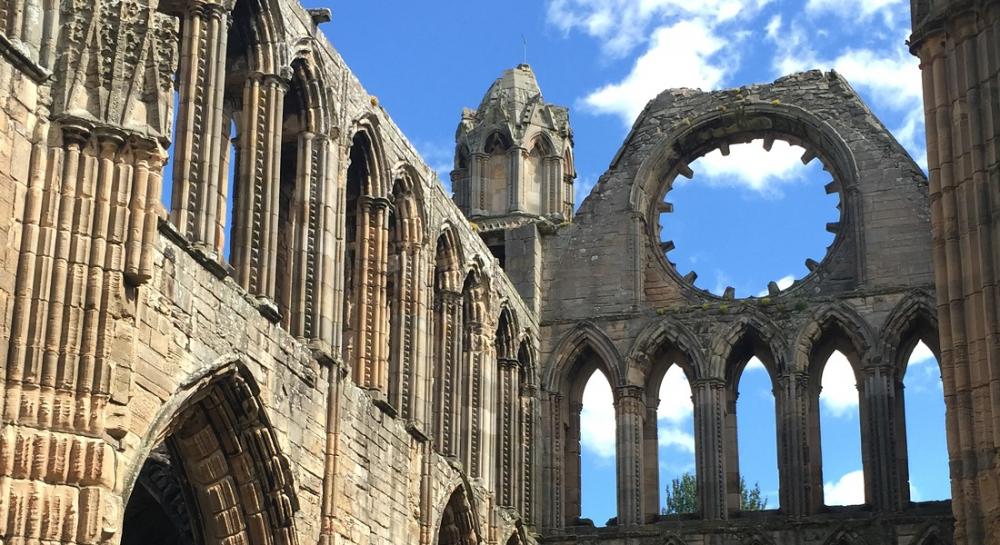 The windows of Elgin Cathedral have been empty of glass since the 1600s, leaving the colour and pattern of the stained glass up to the imagination of visitors.

Now, scientific testing of the cathedral’s window glass has revealed more about its colour and origin, and shed new light on Scotland’s trade routes in medieval times.

Thirty shards of medieval window glass from Elgin Cathedral were tested by scientists at Heriot-Watt University in Edinburgh. The shards were tested using state-of-the-art electron microscopy and x-ray fluorescence to identify the elements present, which give glass its colour.

The tests revealed the trace and rare earth elements present, even when these were in a concentration of less than one part per million in the fragments.

Helen Spencer, the PhD student at Heriot-Watt who led the study, said: “Worship was a major part of medieval life, and the importance of decorations on church windows cannot be overstated. Depending on the time of day, different windows would illuminate the worshippers. Evensong would have a different colour and character to morning worship.

“If we can find what the windows looked like, it can tell us about what religious orders and fashions came in to Scotland, what saints were idolised, who funded the construction of churches, and where the builders, glass and glass decorators came from.

“Unlike most countries in Europe, there is no surviving medieval window glass in situ in monastic or ecclesiastical buildings in Scotland.

“This means we rely on recovered fragments to learn more about glass from this period.

“The tests we carried out have shed light on the colour and origin of the window glass of Elgin Cathedral. We now know, for example, that in the thirteenth century much of the glass came from northern France, while a smaller group may have been manufactured in Germany.

“We also found that the brown and amber glasses had quite different base glass ‘recipes’ to the greens and pinks, meaning they were likely made at separate locations before being imported to Scotland.

“Scotland didn’t manufacture glass in the medieval period, although several regions in England produced white ‘colourless’ glass. At the beginning of the 13th century, much of the white glass came from Normandy and by the 15th century it was coming primarily from Flanders.

“Monastic connections and new trade routes from present day Belgium that connected to east coast ports like Leith, Perth and Aberdeen all had an impact on the glass that was commissioned and used for these beautiful cathedrals.

“Understanding more about these sites brings them to life. The more we discover about our historic buildings the more we can appreciate our history, how people lived, the connections between Scotland and Europe at that time and the craftsmanship involved.

“The next time you visit a ruin in Scotland, take a look at the window spaces and imagine them filled with blue, pink, yellow, green and amber glass from across Europe. It will change how you think about and experience these buildings.”