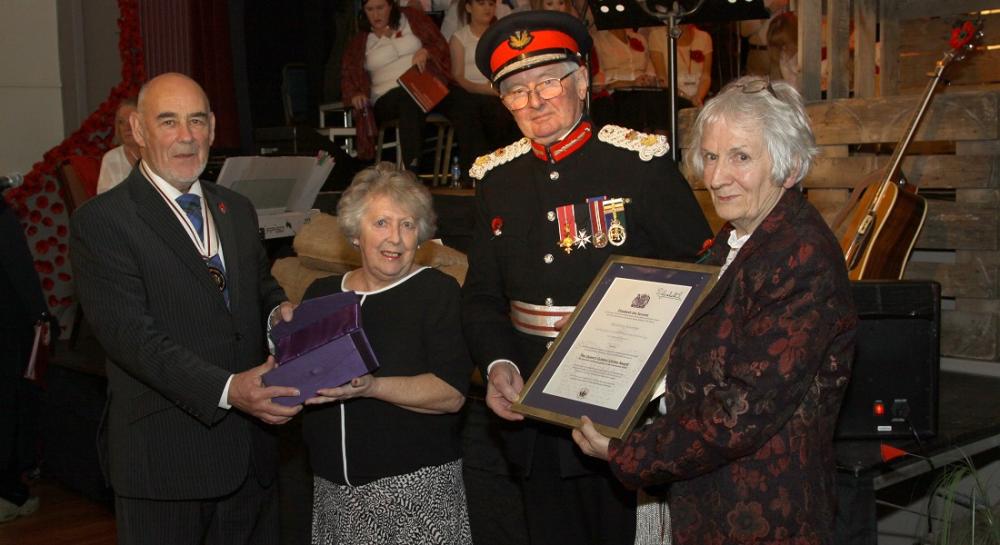 The event was organised by Fochabers Heritage to commemorate the centenary of the end of WW1. The evening started with a gathering in The Square to hear the bells ring out for peace and from there to walk up the High Street following Robbie Innes the piper.

Before the entertainment began the Lord Lieutenant of Moray, Lt. Col. Grenville  Johnston OBE, presented The Queen’s Award for Voluntary Service to Kay Griffin (Chair) and Vicki Holmes (Vice chair) who received the award on behalf of all the Fochabers Heritage volunteers.

The evening included poems, stories and singing from Frankie Graham, who also compered the evening, singing from the Rockset Choir, and some very fine solo performances.  There was also communal singing and music from Bob and Lizzie Sharp. A light supper of ‘trench grub’ – corned beef hash – was served with tea or coffee and biscuits.

“It was a very moving occasion”, Forres Heritage secretary Sylvia Reid said. “Guests all went home with a souvenir enamel mug – with each mug depicting details of Fochaberians who went to war.

“A fitting end to a day of remembrance which included a complementary exhibition with pictures, stories and artefacts from the ‘war to end all wars’, which was open to the public during Sunday afternoon.”