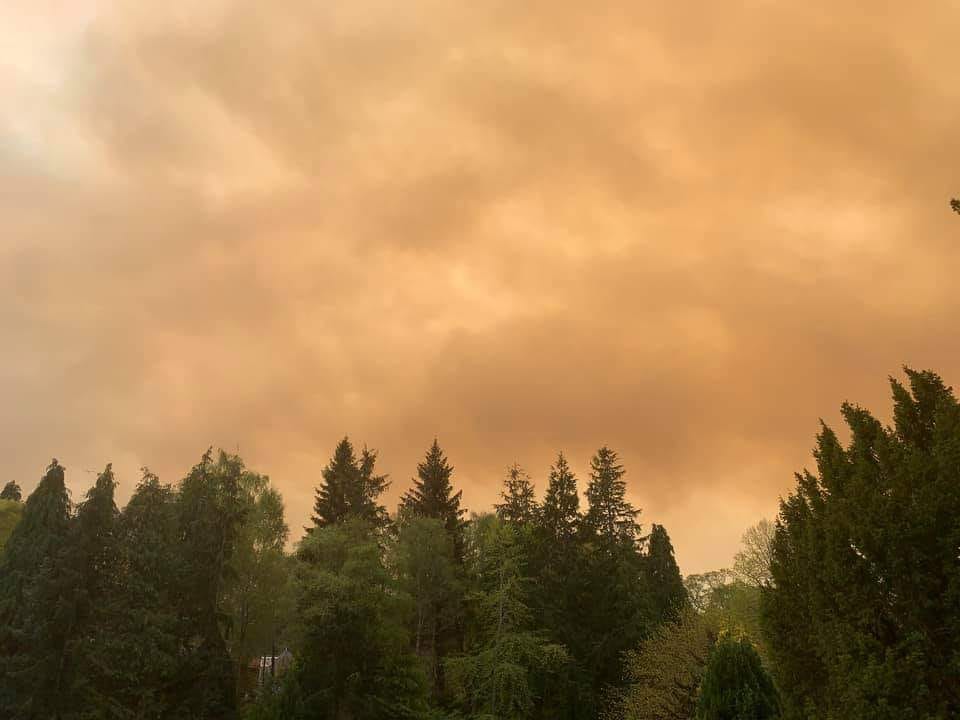 Last night, as efforts to deal with the wildfire in Speyside continued, insideMORAY published a plea from Chair of Police, Fire & Rescue Committee, Cllr Paula Croy, for sightseers to stay away from the area and let emergency services carry out their essential work unhampered.

We repeat that call today, together with comments from other Moray politicians, paying tribute to the work of emergency services as well as asking questions about the causes and impacts of wildfires.

Moray MP Douglas Ross said: “The size and scale of this fire is extremely worrying and I would like to pay tribute to the fire service who are doing an amazing job. Both fulltime and retained firefighters as part of units from Moray and further afield are working flat-out to deal with this.

“As well as this wildfire, there was also a fire near Ballindalloch very recently which required substantial resources to extinguish and a further fire in Hopeman at the weekend, which shows the pressures the fire service are working under at present.

“Although the sunny days are very welcome, this extremely dry weather has created tinderbox-like conditions and fires can spread easily.

“With this in mind, I would ask everyone to take extra precautions and remain vigilant when they are out and about enjoying the good weather, especially if they are in the woodlands and countryside.

“From an unattended barbecue , to a dropped cigarette, it doesn’t take much to start a fire.

“The emergency services do a fantastic job when fighting a fire, but we can all play our part by minimising the chances of them starting in the first place.”

Moray’s MSP Richard Lochhead also paid tribute to the firefighters and volunteers who have been working through the night to tackle the wildfire at Knockando and who are still busy tackling the blaze – the scale of which is alarming.

While the priority is to get the fire under control, the MSP has expressed is concern that this is the latest of several wildfires in Moray and he has now written to the Scottish Fire and Rescue Service Chief Office Martin Blaven seeking a report on the causes of recent events.

Mr Lochhead has also contacted the Scottish Government’s Environment Secretary, Roseanna Cunningham, to find out what work is being done to better understand the causes of these wildfires, and to measure the impact these events have on our local environment and wildlife.

Mr Lochhead said: “The firefighters and volunteers who have responded to the fire at Knockando, and who have worked round the clock to bring it under control, deserve huge praise and I know the community appreciates their efforts.

“We have seen an increasing number of wildfires taking hold in Moray which is a real concern given the impact on our local landscapes, wildlife and habitats, as well as being a threat to local infrastructure.

“Clearly the unusually hot and very dry weather does mean an increase in the risk of wildfires, but I’m keen to get a better understanding of the factors involved in these recent events, and I’ve asked the Fire and Rescue Service for a report on trends locally and nationally.

“Following the fire in Knockando I have also contacted colleagues in the Scottish Government to find out to what extent the authorities are aware of the causes of wildfires and to measure the impact they have on our precious natural environment and habitats.”

While it is not easy to quantify the contribution of climate breakdown to specific weather-related incidents, or to incidents where weather conditions are an important contributory factor, it was left to Speyside Councillor Louise Laing to point out the obvious connection.

Cllr Laing said: “I have so much admiration for our fire service crews battling the blaze, especially as many are retained fire personnel and have full time jobs to get to as well.

“The number of gorse fires that have occurred already this year is worrying and it’s only April. If we have another long dry summer like last year fires like this could be a common occurrence.

“We are seeing more and more extreme weather events linked to climate change, which can contribute to wildfires. I hope that when people see incidents like this on our doorstep in Moray that their awareness of climate change will be greater and they will take steps to reduce their impact on the environment.”