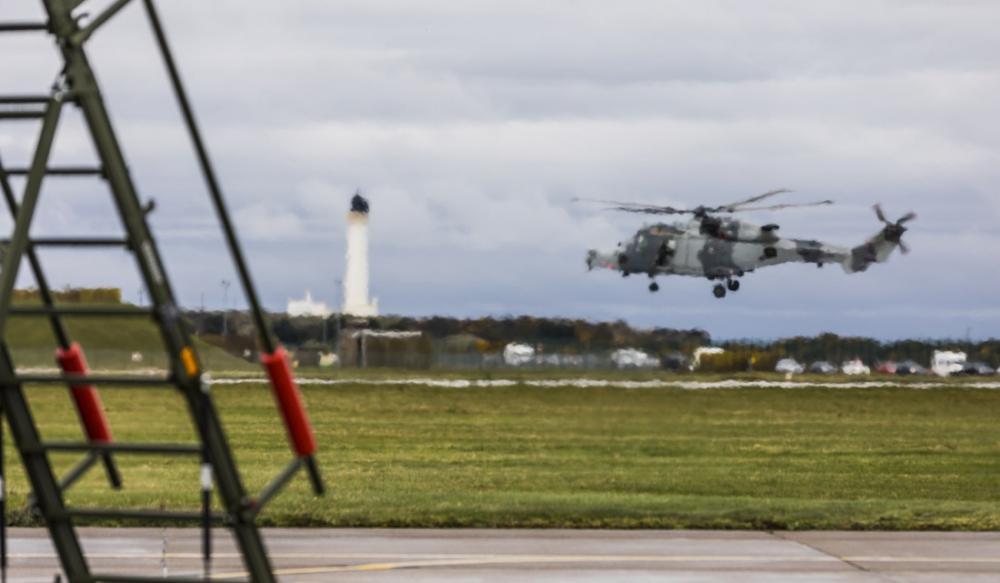 Aircraft from all three Services have been training with their NATO counterparts over the skies and seas of Scotland and Northern England during Exercise JOINT WARRIOR 19-1, which drew to a close last week. Operating out of a number of military and civilian airfields, crews have been put through their paces in air-to-air and air-to-surface combat.

RAF Lossiemouth in Moray saw Typhoons from 1(F) Squadron and 6 Squadron launch in a variety of complex missions involving the F-35B Lightning II, operating in its first ever Exercise JOINT WARRIOR. The Station has also been hosting helicopters from the United States Navy, and Royal Navy, who have been operating out of the RAF ranges at Tain in the Moray Firth and with a variety of ships.

A press release marking the end of the exercise summarises the exercise: “With 13 NATO nations, 6 UK Joint Expeditionary Force partners, and Australia participating in the exercise, we have had the opportunity to improve the defence capabilities of the UK and our allies, conducting joint operations against a range of current and future threats. This has involved a range of air, surface, sub-surface, sea control and maritime security roles.

“Exercise JOINT WARRIOR provides a unique opportunity to integrate a large number of maritime vessels with their colleagues in the air. Maritime patrol aircraft from France, Germany, and Norway have been operating out of Prestwick Airport, formally HMS Gannett.”

The US Navy has also been operating the P-8A Poseidon aircraft, which will enter RAF service in October 2019. Pilots and aircrew from CXX Squadron are currently training on the platform at Naval Air Station Jacksonville in Florida. The first RAF Poseidon is expected to arrive in the UK in 2020, with its first missions over the skies and seas of Scotland beginning shortly after.