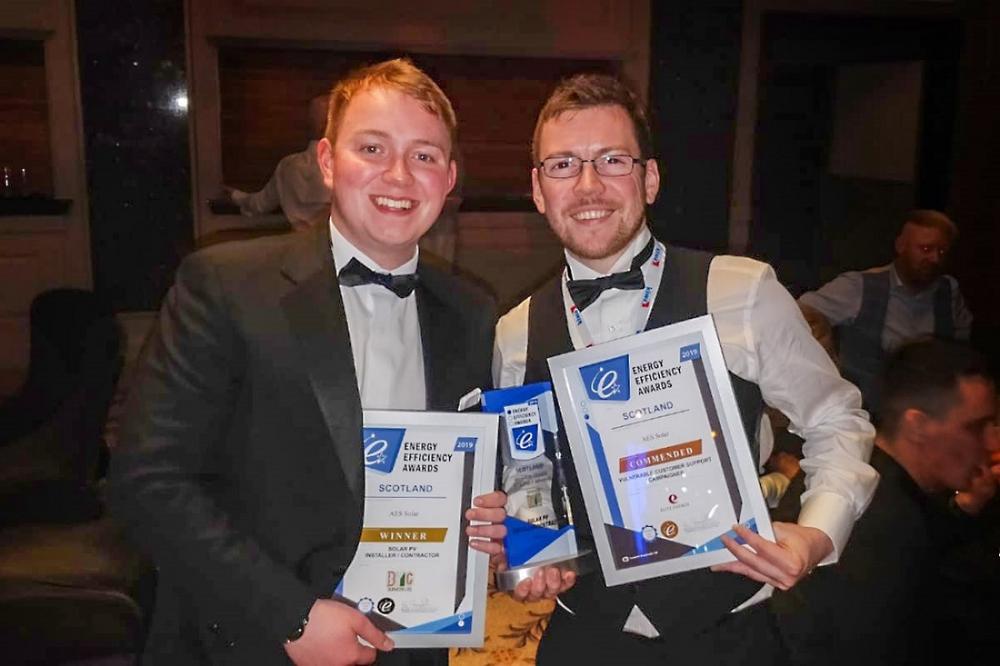 Forres-based company AES Solar was named best in Scotland after winning PV (Photo Voltaic) Installer and Contractor of the Year at the Energy Efficiency Awards 2019.

A Scottish business which prides itself on being the longest established solar company in Europe, has now proved it is also the best in country.

The prestigious awards come less than two months after a regional award win where the company won a Best Energy Efficiency in House Design or Build title. This achievement recognised AES Solar for its work on a remote property in the West Highlands, featured on Channel Four’s Grand Designs House of the Year in 2018.

It adds to what has become a busy year of celebrations for the company which has been successfully trading for 40 years.

George Goudsmit, managing director, said: “Every day we strive to be the best in the business, and these accolades show that those efforts have paid off. We were up against tough competition, and to win this award makes us proud to have built a team that truly is the best.

“This is the icing on the cake for our birthday year. Three awards in the space of two months is good news for our customers too. They can be confident that from beginning to end they are dealing with a professional, industry-leading company, whether they are a single domestic user or a large housing developer.

AES Solar is the only manufacturer of solar thermal panels in Scotland, employing 15 people at their head office in Forres with a recently opened Edinburgh branch to meet the growing Central Belt demand.

Technical director Campbell MacLennan added: “We started in 1979 by designing and manufacturing solar thermal panels. Over the years solar PV evolved, becoming more widespread and cost-effective. We have continuously adapted to these changes in the marketplace, reflected in our position as multi-award winning industry experts.

“These awards are a fitting recognition, and a reward for always striving towards the highest quality of products and workmanship. These awards are only strengthened further by our MCS and ISO 9001 accreditation, which we’ve held for more than 10 years. This can provide our customers with the high level of confidence they require. We really are the solar specialists and wouldn’t be where we are today without the dedication and expertise of our excellent team.