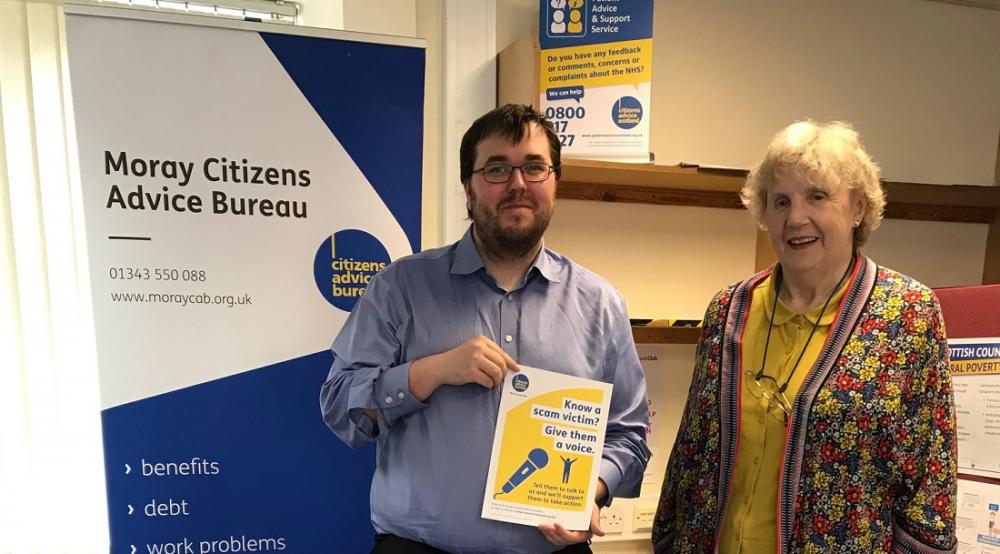 Moray Citizens Advice Bureau (CAB) has joined other CABs across the UK earlier this week to launch this year’s Scams Awareness campaign.

The CAB network’s Scams Awareness campaign runs for the next two weeks and aims to tackle the stigma scam victims often feel about reporting scams. Moray CAB is urging local people who have been hit by a scam to STOP, REPORT, and TALK about it.

Launching the campaign at the local branch, Moray Citizens Advice Bureau Manager Mary Riley, said: “Around half of us have been targeted by a scam in the last year. Some of us have been hit by more than one. Scammers can come at us online, by telephone, or in person. But whether it’s a builder who does shoddy work or someone who sells you fake goods or someone who hacks into your computer or phone and empties your bank account, none of us can afford to lose money to con artists and we all need to stand up to them.

“That’s what this campaign is all about. We want to raise awareness of how scammers operate, and encourage people here in Moray to report them to the police, and also to talk about scams to your friends and family.

“Because scammers depend on us staying silent. So the more we talk about them, the more aware people become, and the harder the scammer will find it to scam the next person.

“So that’s why the theme of our campaign this year is STOP, REPORT, TALK. And that’s my message to people here in Moray. If we all work together we can beat the scammers. It’s time to do that. You can get information on how to spot scams from Citizens Advice Scotland website www.cas.org.uk or here at the CAB 6 Moss Street, Elgin, IV30 1LU.”