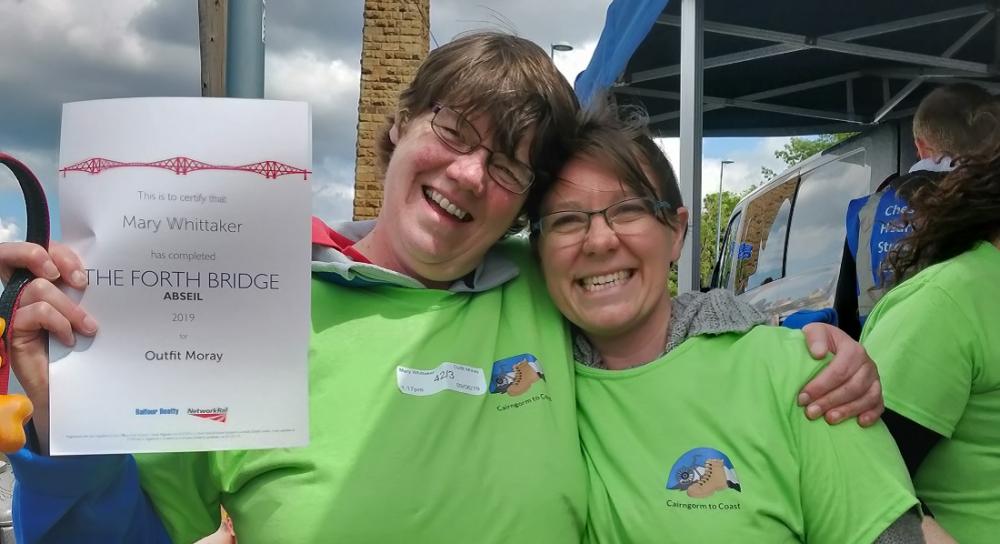 Local outdoor learning and adventure youth charity, Outfit Moray, are running a programme of events for deaf families over the summer holidays, thanks to a generous grant of £4,000 from MFR Cash for Kids.

Deafness is no barrier to adventure, as the achievements of Mary Whittaker, described as the Church of Scotland’s only deaf minister, demonstrate.

Growing up, Mary had often been told she couldn’t do things, because she was deaf, but all that changed in December 2017 when Outfit Moray gave her the opportunity to abseil down the front of Forty Four in Lossiemouth (previously Grampian Furnishers).

As the charity’s Community and Corporate Fundraiser, Karen Cox recalls, Outfit Moray were holding a fundraising abseil, and Mary was delighted when she was told she could take part: “Mary approached me and asked if she was allowed to abseil.

“As a charity, we work with young people with a variety of different needs, so from our perspective, Mary being deaf had no impact on her ability to abseil. Mary was totally blown away by the opportunity and was so excited to be taking part.

“Her face was a picture of pure joy when she landed, and she immediately took up my challenge of abseiling from the Forth Rail Bridge.

“Fast forward to June 2019 and Mary joined nine other supporters to take part in the CHSS (Chest Heart & Stroke Scotland) organised event at South Queensferry. As Mary’s first language and main means of communication is through British Sign Language (BSL) she was accompanied by an interpreter who translated all the relevant instructions, making sure Mary was fully aware as to all the health and safety guidelines and fully prepared for her adventure.

“Mary’s hearing dog, Scott, waited patiently at the bottom and was very pleased to be reunited with a beaming Mary when she landed.” “I have still have not come down to earth properly”, adds Mary. “The worst part for me was going over the barrier, not the walk along just below trains (I really enjoyed feeling the trains which passed above me), nor the abseiling itself.

“I am so proud of myself, and I am so glad Outfit Moray decided to follow up my dream and make it possible.”

“Mary raised £745 for Outfit Moray’s activities with deaf families across Moray”, Karen concludes. “A total that will hopefully be added to by Moray BSL Services, who are auctioning off a Moray Golf Club 4ball voucher.”

More information about Outfit Moray’s work, including their work with deaf families, is available on https://outfitmoray.com/ and from Karen Cox at the charity.