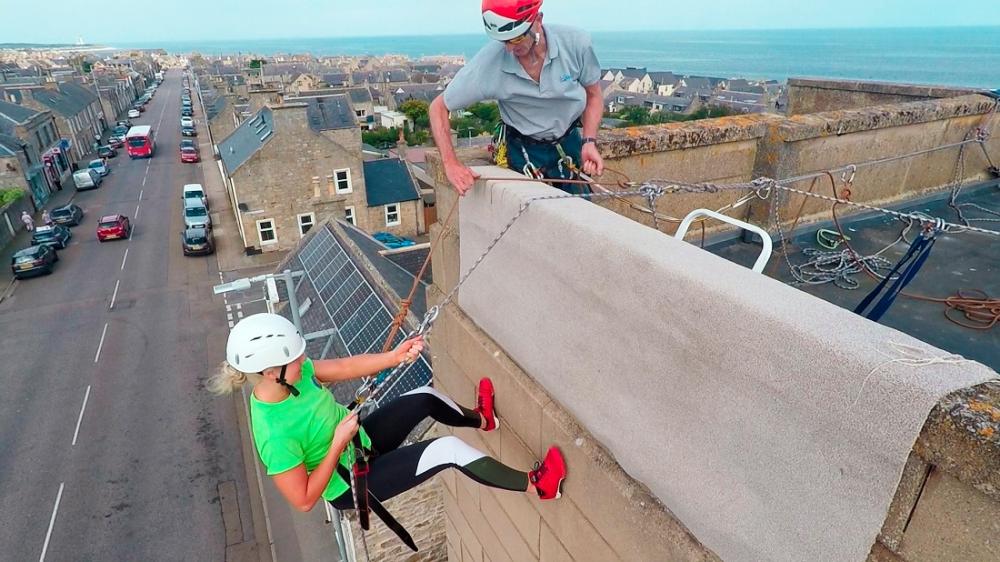 Outfit Moray’s abseil @44 Queen Street has again been hailed as a huge success as 14 local groups and charities bring in the money!

Now in its third year, Outfit Moray’s charity abseil is a growing event, with this year’s event completely sold out.  73 people abseiled down the front of Lossiemouth’s most iconic building with blue skies and glorious sunshine backing them for most of the day.

The charity’s Community and Corporate Fundraiser, Karen Cox says: “It was such an amazing day.  We knew it was going to be busy as we had closed entry a few days before, but we were blown away by the number of people joining us on the square to support their friends and family taking part.

“Our fundraisers started the event off, including young Eleanor Burch and Munro Newlands from our Deaf families. Their fundraising is being ring-fenced to help provide a respite break for young people from Deaf families next summer and they both raised just over £800 between them.

“Being a small charity ourselves, we know just how hard it is to raise funds and, with 535 charities in Moray all fighting for the same pound, we are proud to be able help support our fellow good causes. Last year’s event raised just over £4k and we are absolutely delighted that this year’s total doubled that.

“It’s great to be able to work so closely with other local businesses, and we are incredibly grateful to Jason and Jill Fletcher of Forty Four Queen Street, who were most accommodating and supportive of the event. They even offered all participants a free drink and set up a mini café downstairs in their foyer!

“Clan Cancer Support were one of the big success stories of the event, with their supporters raising over £2,000 for them. Enable Scotland raised over £1,000 and Longmore Community Hall received just under £900, while Outfit Moray’s fundraisers were able to raise over £2,235 for their favourite charity. This year, the total amount raised across all the groups and charities was an incredible £8,000!”

“Putting our skills to use for the benefit of the wider third sector is a great thing to do”, adds Outfit Moray’s CEO, Tony Brown. “ It was fantastic to see so many young people getting stuck in!”

More information on the work Outfit Moray does with vulnerable and disadvantaged young people across Moray can be found online at www.outfitmoray.com as well as on Facebook and Twitter.