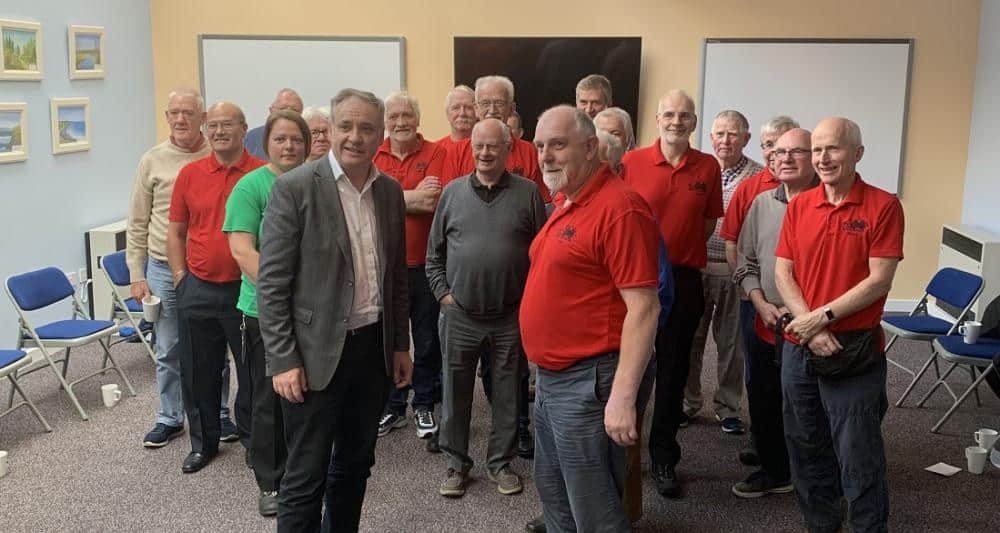 Elgin and District Men’s Shed is looking for a space with a sitting area for chatting over coffee, a workshop for members to share and pass on skills, and a kitchen to encourage cooking, which will benefit the health and wellbeing of its members.

They invited Moray MSP Richard Lochhead to learn more about their work and to seek his support in their efforts to find permanent premises.

Mr Lochhead agreed to investigate what funding the group may be eligible for, as well as to discuss their needs with the Moray Council’s Chief Executive, Roddy Burns, at their next meeting.

Commenting on the visit Mr Lochhead said: “It was great to meet some of the members of Elgin and District Men’s Shed and to hear just how much they enjoy time in each other’s company and the benefit they get from that.

“We know that men involved in the Men’s Shed movement report to be living happier and healthier lives, and for that reason Elgin and District Men’s Shed has an invaluable role to play in the local community.

“For some time now they’ve been working hard to try to establish a permanent home in Elgin with space for a workshop where they can share their skills with others, and also room where they can relax together over a cuppa.

“I’m keen to do all I can to support the group and will be making some enquiries as to what financial support they may be eligible for or grants they could apply for. I am due to meet with the Council’s Chief Executive and I will raise with him the difficulties the Men’s Shed have had trying to secure permanent premises and I’ll be urging the local authority to work with them to find a home.”

Mr Lochhead has since met with the Council on Wednesday morning and they’ve committed to looking at the issue again to see if they’re able to help.

In the meantime, Elgin and District Men’s Shed continues to operate from its temporary unit in Perimeter Road, Pinefield Industrial Estate, and is open Tuesdays and Thursdays from 10am till 4pm.

It should be noted that “The essence of a Shed is not a building, but the connections and relationships between its members”, as the group’s website on http://elginmensshed.uk/ explains.

“Men’s Sheds are similar to garden sheds. They are places to pursue practical interests, practice skills and enjoy making things and mending. The difference is that garden sheds and their activities are often solitary in nature while Men’s Sheds are the opposite. They’re about social connections and friendship building, sharing skills and knowledge, and of course a lot of laughter.

“Many don’t have premises at all in the beginning and instead form a group that meets regularly for the social connection, company and camaraderie until they can find somewhere to kit out with tools. Sheds get involved in community projects and building things for schools, libraries and individuals in need.”

More information about the Elgin and District Men’s Shed is also available on their Facebook page on https://www.facebook.com/Elgin-District-Mens-Shed-177379416194941/