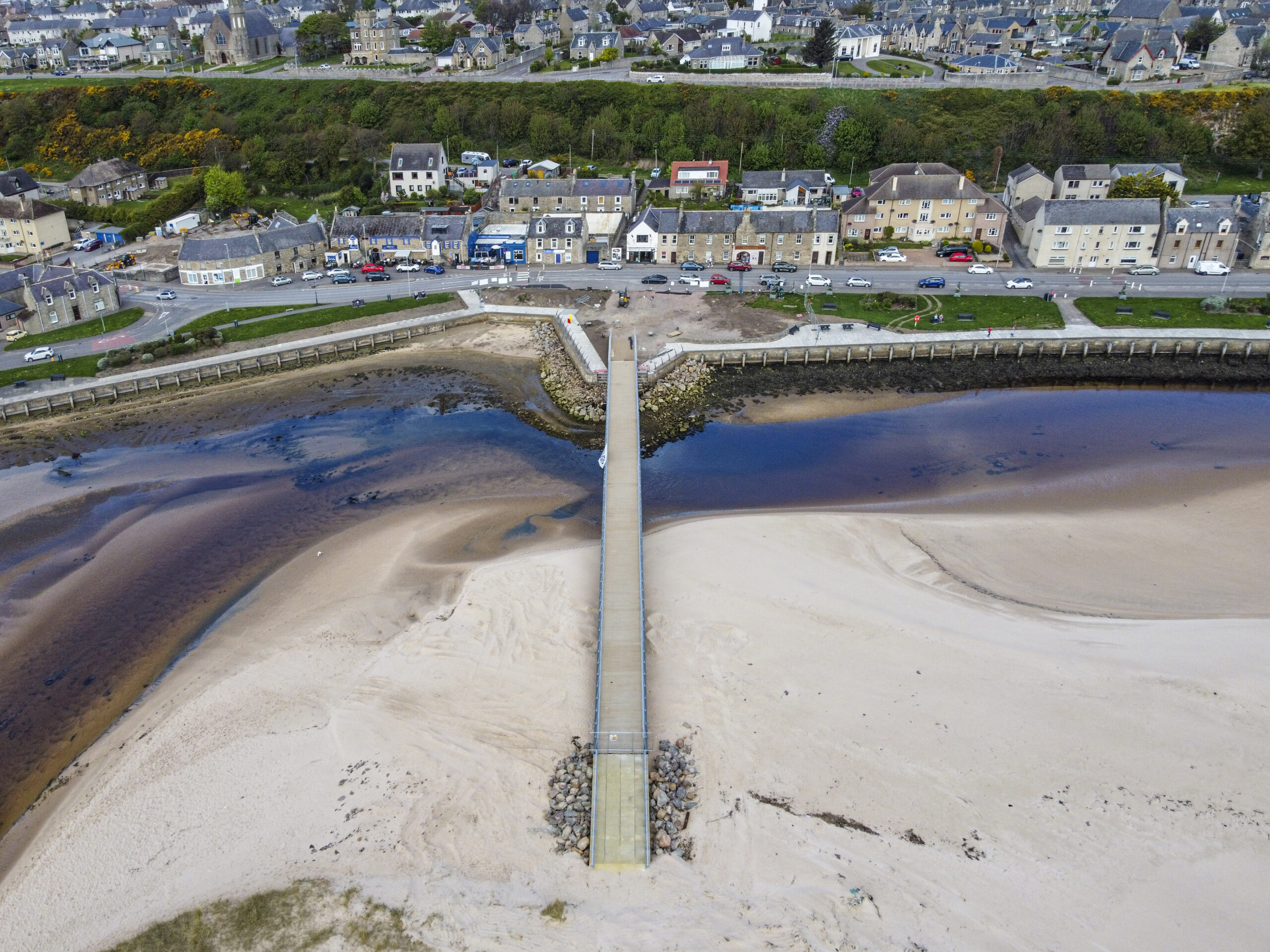 Moray Council has also formally taken ownership of the new bridge to Lossiemouth’s East Beach, which was funded by the Scottish Government following support from Lossiemouth Community Development Trust and Highlands & Islands Enterprise (HIE) for the feasibility study.

The old bridge was closed in July 2019 owing to safety concerns and has now deteriorated further. The new bridge is sited off the Esplanade, where an original bridge was situated prior to the 1919 construction of the old wooden structure. The old bridge is due to be removed in coming weeks, with details to be finalised.

Speaking at the opening of the bridge, Moray Council Convener, Cllr Marc Macrae, said: “I know how excited locals and visitors alike are at regaining access to the East Beach and I look forward to seeing everyone enjoying it this summer.

“The hard work that has gone in to getting this bridge designed, constructed and open and access to the East Beach restored in less than three years is extraordinary. My gratitude especially goes to Lossiemouth Community Development Trust, the Council’s own engineering and consultancy team for managing the project, The Scottish Government and, of course, the wider Lossie community.

“Lossiemouth has a great atmosphere, particularly in summer, and direct access to the beach from the Esplanade will be a boost for local businesses coming into the busy holiday season.”

Cabinet Secretary for Rural Affairs and Islands, Mairi Gougeon MSP, added: “The Moray coast has long been a popular destination for locals and visitors and the loss of the Lossiemouth East Bridge has taken its toll on the local community in recent years. That is why the Scottish Government has invested £1.8 million of funding to replace the old bridge. The new bridge is fully accessible, including for buggies and wheelchairs, making the beach available to all.

“It is great that the new bridge is now officially open and that locals and visitors are easily able to access such a beautiful and scenic spot once more.”

Chair of Lossiemouth Community Development Trust (LCDT), Alan MacDonald, said: “This is an exciting and historic day for the town as we celebrate the opening of a magnificent new bridge, which will be used to welcome townsfolk and visitors onto one of the finest beaches in Scotland.

“It was in 2015 that the Trust took up the challenge to find a solution to the ageing and decaying East Beach Bridge and now on behalf of Lossiemouth’s community we extend thanks and appreciation to every person and organisation who contributed to this significant project.”

Managing Director of Beaver Bridges, Pete Dalzell, agrees: “We’re grateful for the support we’ve received from the local community while working on this project. We build over 150 bridges a year and every-so-often a special one comes along – this is a very special one for us.”

The steelwork is finished in fluoropolymer coating and sit atop pile driven columns and connected into ramps built either side. Rock armour surrounds the entry points to the bridge. New footpaths to access the bridge have been installed and the existing ones on the Esplanade side upgraded.

Bollards to prevent vehicular access are at the end of the bridge and the new bridge supports buggies and beach wheelchairs, making access to the popular beauty spot more accessible than ever before.