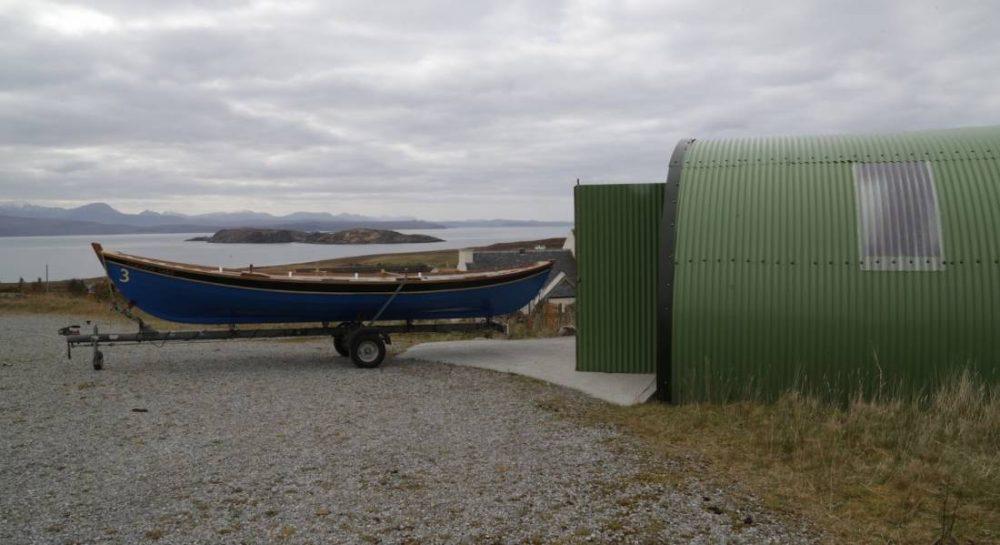 A DOCUMENTARY FILM shot as a project by Glasgow School of Art student Sophia Sheppard and featuring Findhorn traditional boat builder Frank Whyte, has been premiered at the school’s annual degree show.

Mr Whyte was a loved and respected Findhorn man who sadly died in May when his boat was one of several that capsized during a freak squall in Findhorn Bay.

His death came just ten days before the project in which he played a major part was completed – now the finished film, ‘With the Rising Tide’, has been dedicated to his memory by Ms Sheppard.

The film started as ‘the Scottish rowing project’ in the Fife port of Anstruther. Supported by the Scottish Fisheries Museum, the first St Ayles Skiff was built in 2009 – now hundreds of the boats have been built throughout the UK and overseas.

Ms Sheppard’s film explores the themes associated with our seafaring heritage, our relationship with the sea and a passion for rowing. The main focus of the film became Frank Whyte and his enthusiasm and positivity for the boats.

Dedicating her work to Frank, Ms Sheppard said: “His tragic death made it poignantly clear how important he was to my project. He naturally encapsulated all the themes I was researching – about the essence of community and connections between people and the sea.

“The shock and devastation of his death made finishing the film very hard, but dedicating this work to Frank is a small gesture that I hope honours his memory.”

As well as filming Frank in Findhorn the film features scenes from the Cullen Sea School shot earlier this year.

(insideMoray wishes to make it clear that a video link previously placed on this story has been withdrawn, as it featured an earlier work by the same artist who does not wish it to be viewed by the public at this time.  A public viewing in Moray of the finished video noted above will take place at the Findhorn Bay Arts Festival later this year.)