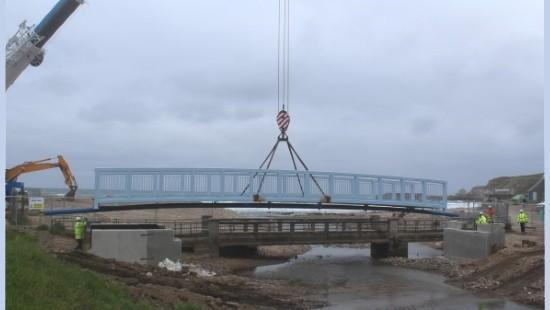 A LONG AWAITED bridge providing pedestrian access between Cullen and its local golf club and beach area has taken a major step towards completion.

The £400,000 project to construct a new bridge over the Burn of Cullen saw a 62-foot steel span put in place this week after it was transported from the Yorkshire yard where it had been fabricated.

Replacing an original bridge that had been built by the Cullen Town Council in the 1930’s, work on the replacement began in March and is now expected to be wrapped up by next month.

Funded by Moray Council, the bridge was designed in-house by the council’s civil engineering consultancy in collaboration with main contractor, Balfour Beatty. The bridge is the only safe pedestrian access between the town and the golf club and beach area.

It spans 15feet upstream of the position occupied by the 1930’s construction, which had shown a rapid deterioration in recent years. The new bridge’s decking is around a metre higher than the former construction, reducing the risk of flooding at high tide.

A Moray Council spokesman said: “Although the main part of the contract is close to completion, ancillary works will continue for around another month during which access will be maintained to the annual travelling fair which is due to arrive in late June or early July.”

A parallel has been drawn between the Cullen bridge and the East Beach bridge in Lossiemouth, which was under the control of the Lossiemouth Town Council and was built around 12 years before the Cullen crossing.

Moray Council has steadfastly refused to admit ownership of that bridge – forcing local community representatives to successfully apply for grant funding to legally establish ownership. However, insideMoray understands that a Notice of Motion is being put to Moray Council requesting that they accept ownership and allow planning for the future of the bridge to proceed.