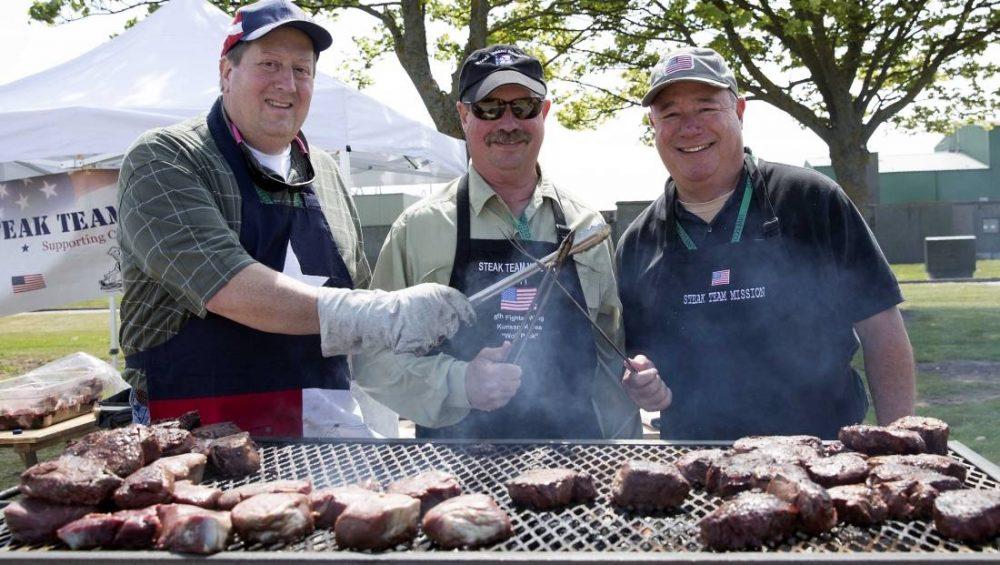 RAF LOSSIEMOUTH PERSONNEL enjoyed what was perhaps their most unusual meal recently when a team from the United States visited not armed with jets – but with cooking utensils and Texan steaks.

The visit was from the Steak Team Mission, an organisation set up in 2002 by Harvey Gough from Dallas, Texas who was determined to give something back to troops serving his country.

The ethos of the Steak Team is to roll up where US troops serve around the world and cook them steak dinners.

That was easily transferrable to RAF men and women to for the most part have commonly served alongside US troops at various operational zones around the world – in particular when the RAF Lossiemouth Station Commander, Group Captain Paul Godfrey, had a chance meeting with the team – and invited them to visit his base.

With typical US enthusiasm the Steak Team Mission offered to cook a steak dinner for the Servicemen and women when they visited – much to the delight of RAF personnel on the Moray base.

The visit was co-ordinated by Warrant Officer Kev Hastie, who said: “What this team do is amazing! Under normal circumstances they give up their own time at their expense for US troops serving around the world.

“To deviate from the norm and provide for RAF Lossiemouth personnel is most gratifying. What they have done is no small task and the background work was intense, but the end result was well worth all the effort.

“Bringing a large proportion of the Station together when we are so busy was always going to be a task – however, the offer of a Texan steak, prepared and cooked by real Texans, was enough to see 750 personnel venture out into the afternoon sunshine and dine.

“Our sincere thanks go out to the Steak Team Mission and the US Air Attaché, London for bringing this event to Lossiemouth.”

Mr Gough, who created the programme following the 9/11 attacks on the United States, said: “The Steak Team Mission has travelled to many locations all over the world and each one has its own mark of satisfaction.

“Delivering this mission to the personnel at RAF Lossiemouth has been marked as one our top missions to date.”