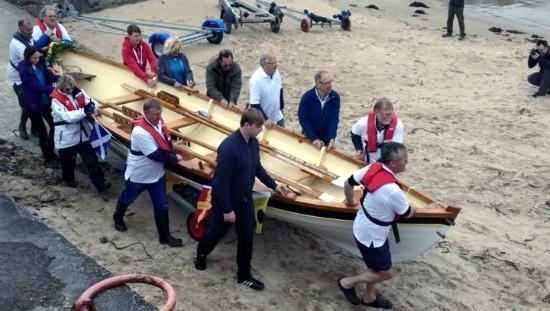 FIVE MONTHS WORK by 16 volunteers has resulted in the launch last weekend of the first skiff produced by the Cullen Sea School.

The ‘Mairi’ was successfully launched after being piped to the harbour and carefully lowered into the water for the first time – and immediately put to use by taking a few lucky spectators onto the water for its maiden trip.

Named after the secretary of the Sea School operators the Three Harbours Association, the ‘Mairi’ was built by volunteers who included in their number pupils from Buckie High School. They were guided by experienced boat builders throughout the operation.

The skiff was created thanks largely to a donation by the Gordon and Ena Baxter Foundation for whom a spokeswoman said: “After a visit to the group and its facility last year, it was clear that this is a truly creative and community led project. We awarded a donation to purchase the tools to build their own skiff.

“After much effort by the group’s boat-builders, the St Ayles Skiff was officially launched. It was fantastic to see so many members from the local community join the festivities and watch the skiff being launched into the water for the first time.

“This is a great addition to the Cullen Sea School and something that can be used and enjoyed throughout the summer months by people of all ages.”

Plans are now being laid to form a rowing team from community members in Cullen, Portknockie and Findochty.