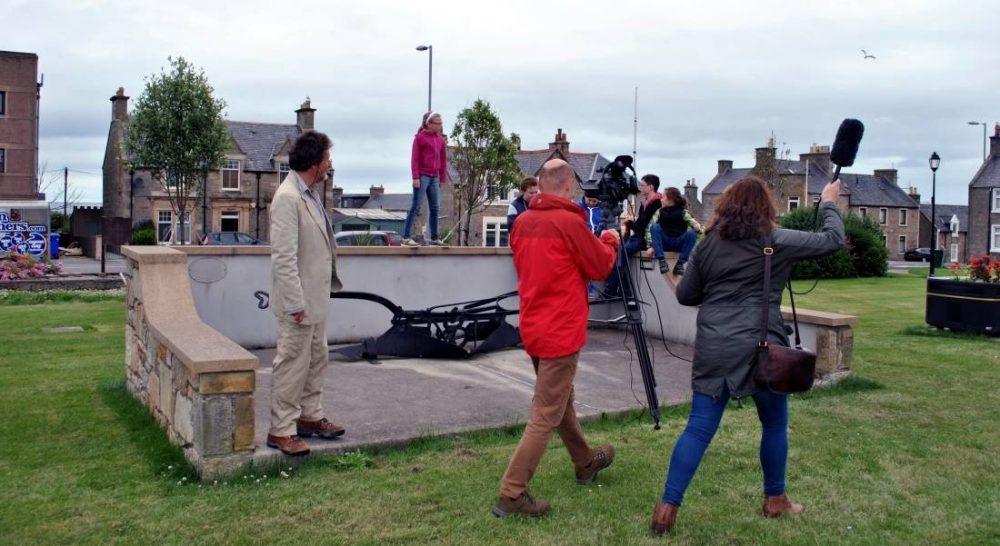 A NEW FILM being described as a ‘celebration of the community’ is set to have its first public showing at the Lossiemouth Town Hall later this year.

Produced by Creative Visions with help from young people and the general community, the latest production has been given the title ‘Lossiemouth – Land, Sea and Sky’.

Guest appearances in the production will be Dr Paul Whittaker OBE, Dr John R Barrett and Dr Gordon Noble from the Aberdeen University Archaeology Department. Filming has taken place throughout the town as well as at Kinnedar, Spynie Palace and the Pitgaveny Estate.

Producer Yvonne Findlay said: “Once again all the music is original – Trevski is working with us again this year and we have another song from Iain MacGillivray and Ranald Smith, written by the late Davey Steel.

“Musician Ray Chaston and local poet John Mackie have also joined the team. Archive photographs and cine film from the town is included courtesy of the Lossiemouth Museum and Donnie Stewart.

“An excerpt of cine film was thought to be lost and is showing scenes of a visit to Hersbruck in the 1970’s – while the Seagull Factory has been restored by Tim Flood for inclusion in the production.”

The film will premiere at Lossiemouth Town Hall 7.30pm on Friday, November 25 – tickets will be on sale in October. Dates for a matinee screening at St Gerardines Church and Christmas party at St James are also being planned.

Creative sessions continue throughout the summer to which everyone is welcome with the contact being yvonne@creativevisionsmoray.co.uk.

The Creative Visions team have also been involved in the production of a film about HMS Fulmar to be screened shortly – and a Forres Community Celebration Film to be screened at Forres Town Hall 7.30pm on Saturday, December 3.