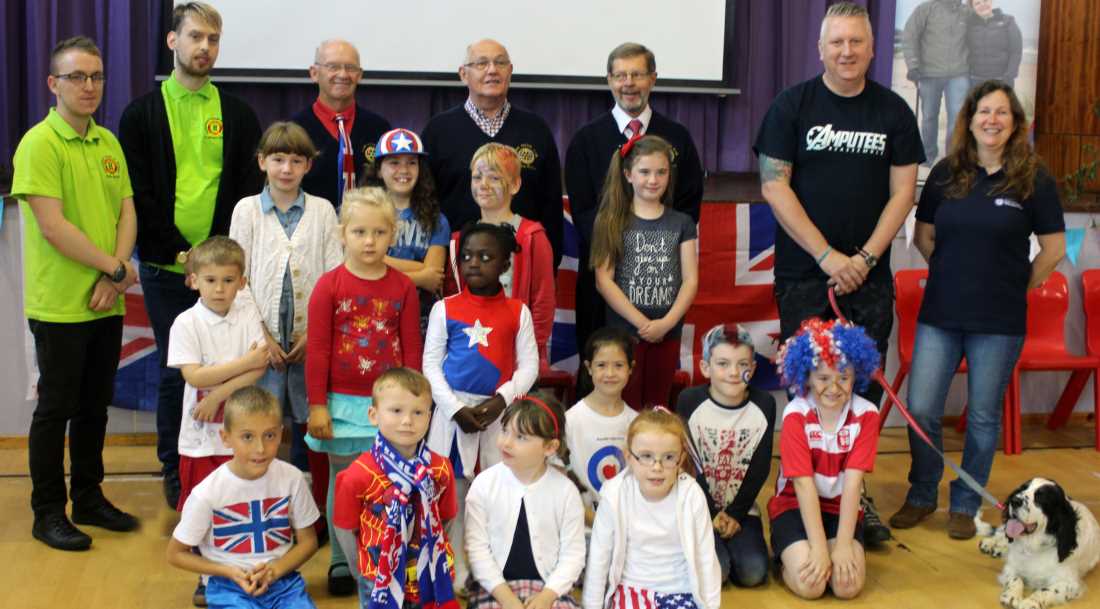 RED, WHITE AND BLUE was the order of the day for children and staff on the final day of term at New Elgin Primary School on Friday.

The event was part of a series undertaken around the UK in memory of the Battle of the Somme and aimed at providing young people with an insight into the work of the three main service charities in the UK – the RAF Benevolent Fund, ABF (The Soldiers Charity) and the Royal Navy & Marines Charity.

New Elgin Primary 5 Rotakids organised the event with assistance from teachers Calum Henderson and Sarah Will – and were delighted at the reaction as dozens of the children made a special effort to dress up for the occasion, as did most of the teaching and support staff.

Two special assemblies for the school’s 600 pupils were attended by visitors from the Elgin Rotary, Team RAF Benevolent Fund and very special guest Mick McConnell, who lost a leg when serving in Afghanistan. Mick brought along his partner from that day, former explosives detection dog ‘Memphis’.

Meanwhile on the school playground pupils were being treated to displays by the RAF Lossiemouth Police unit and 51 Squadron RAF Regiment.

Sarah Will said: “Everyone had a fantastic day with the children really getting into the theme and very aware of the importance of the event.

“Red, White and Blue day is officially on Friday, October 14 – ours was a week early because of the holiday – but it was both an educational and fun day for everyone and I’m delighted we decided to end the term in such a wonderful fashion.”

During his talk to pupils Mick McConnell was taken aback by the frank nature of many of the questions coming from the pupils: “They were clearly taken with Memphis of course, but their questions were actually very insightful for people so young.

“The importance of the job that Memphis carried out was certainly not lost on the children, who were keen to know how he had escaped the explosive that I managed to step on. They also wanted to know how I managed with my ‘robotic’ leg – and if I had a second one to wear in bed at night!”

Another highlight for the children was a visit from the RAFBF’s ‘Ben Elephant’, with the chair of Team RAFBF Lossiemouth Karen Cox saying: “We had a great day with the children at New Elgin Primary who were wonderfully attentive and surprisingly knowledgeable.

“Ben was clearly a star of the show and caused a lot of excitement – but the children were the real stars, they took to the general theme from the start and made it an absolute pleasure to have been a part of Red, White and Blue day.”

Find out more about Red, White and Blue Day online.