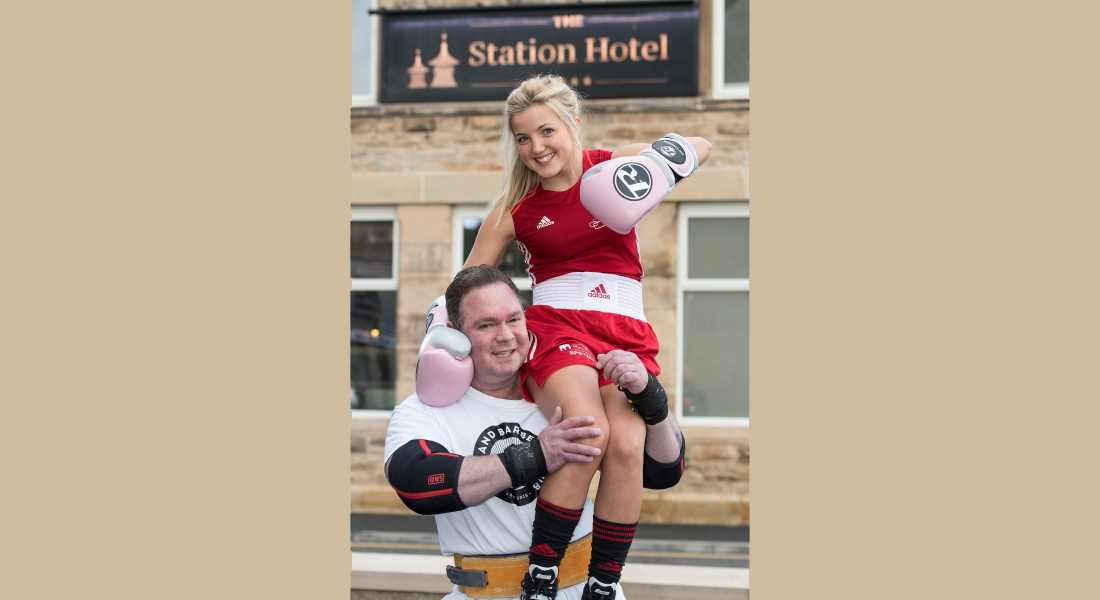 AS EMPLOYEES OF one of Speyside’s most luxurious hotels, waitress Megan Gordon and chef Neil Stewart are expected to achieve the gold standard for guests on a daily basis.

However, thanks to the support of their employers at The Station Hotel in Rothes, the pair are also now on course to achieve their own golden moments in the sporting arena.

The boutique hotel is sponsoring amateur boxer Megan Gordon and European champion powerlifter Neil Stewart in their quests for sporting excellence, providing financial support towards the costs of training, equipment and travel.

And the hotel, which opened earlier this year after an extensive refurbishment, also arranges rotas and days off so that the pair of sporting superstars have the time they need to dedicate to their rigorous training and competition schedules.

Two-time Scottish champion Megan (17) has already amassed a huge number of titles, and she has just returned victorious from the Esker Boxing Cup in Ireland. She now has her sights set on a place in the Scottish team heading out to the Youth Commonwealth Games in the Bahamas next summer.

Neil (40) took gold medals in all three of his events at the WPC European Powerlifting Championships earlier this year, and flies out to Louisiana in the United States in November where he will compete in his sport’s world championships.

General manager Neil Slessor says the hotel and its staff are immensely proud of Megan and Neil’s achievements, and want to provide as much support as possible as they progress in their chosen sports.

He added: “They are both excellent employees who are not only dedicated to their jobs, but to their sports too. It is a huge commitment on their part, and we are only too happy to do anything we can to make their lives that bit easier.

“We have a small and close-knit team here at the hotel, and everyone is totally behind Megan and Neil. We know they have what it takes to reach the top, and when they do, it will be great to know that we have helped them to get there,” he adds.

Megan, from Rothes, has been boxing since the age of 12 and is a member of Elgin Amateur Boxing Club. She trains three times a day, working on her strength and conditioning, ring craft and cardiovascular fitness, and travels to the Central Belt most weekends for training with the national team.

She said: “That’s the ultimate dream – to take part at the Olympics and to win an Olympic medal. I feel really lucky to get the support that I do from the hotel, and the fact that they are so flexible with my hours makes a huge difference.

“It’s great to have someone else at work who understands how hard it can be. Neil and I compete in completely different sports and train in different ways, but we talk a lot about the ups and downs.”

Neil, from Aberlour, hopes he will be on a high after returning from the world championships, which get underway on November 7. A member of the Highland Barbell Club based at The Forge Gym in Inverness, he has very quickly reached the top of his sport.

He has achieved lifts of 227.5kg for squats, 180kg for bench press and his deadlift PB is 265kg. Neil believes that the lure of a world title will only help those numbers to increase.

He explained: “I had been training for vanity reasons for about 10 years, without any aim to compete. In December last year, it dawned on me that I needed a goal so I decided that I would enter into competitions. I never thought that I might actually win.

“I need to be quite structured in my training, and the hotel understands that. I feel really lucky to have their support – and I really hope I can bring home a gold medal for them.”