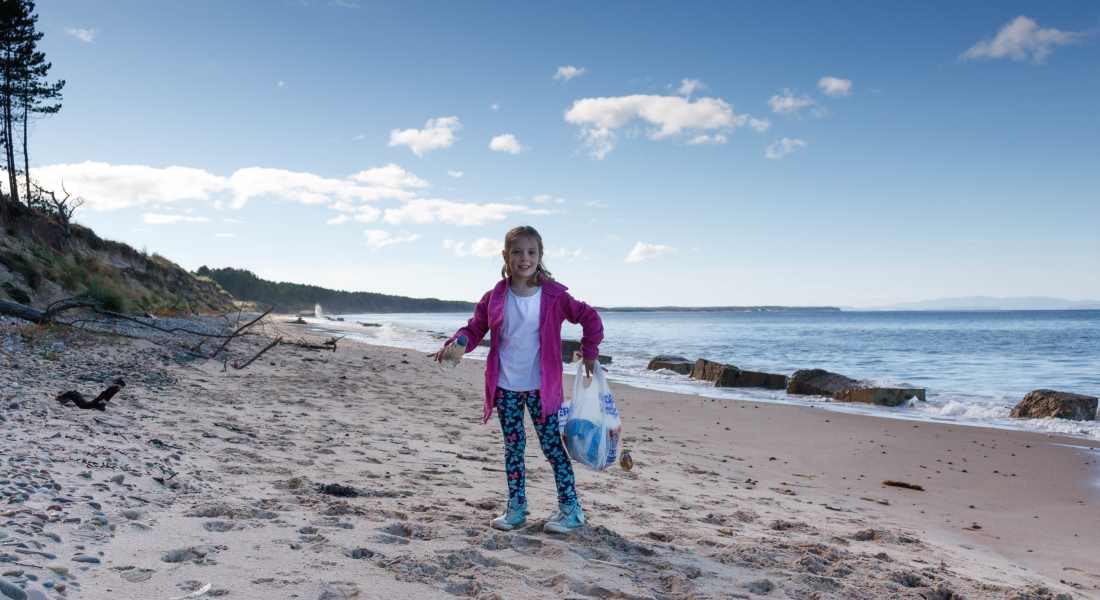 A NINE-YEAR-OLD HYTHEHILL Primary school pupil has been showing grown-up litterbugs who should know better the error of their ways – and hoping that they will follow her example.

Jasmine Owen spends much of her free time with her family following outdoor pursuits, making the maximum use of the rich environment they are offered around Moray.

However, during these family outings on the beaches or woods she has been left despondent by the litter being left behind by others who clearly care far less for our shared environment – and decided that she could at least do something about it.

Mum Claire explained: “Jasmine has always been interested in helping the environment in some way, for example last year she donated some of her Christmas money to save a snow leopard with WWF.

“We are often in woods or along a beach enjoying the stunning scenery we have in Moray – then a few months ago we passed one spot that was particularly messy with litter and Jasmine commented on it, then said that it was a pity we didn’t have a spare bag with us to clean it up ourselves.

“This sort of comment isn’t unusual but on our walk at Spey Bay on Saturday we came across the remains of a camp fire and a large pile of rubbish lying alongside. Jasmine spotted it and tutted – so I handed her a bag and within seconds she had filled that and was asking if we had another.

“We found a second bag for her, so while her sisters played in a stream Jasmine happily wandered off hunting out all the litter she could find – commenting on the efforts some people go to in hiding rubbish! The second bag was full fairly quickly too, and I don’t doubt she’d have filled a third if we’d have had one with us.”

Asked why she thought people leave so much litter behind them, Jasmine told insideMoray: “I don’t know – but they should be feeling guilty because they know it’s bad for nature. I feel quite angry because I don’t like that animals could suffocate – some animals might even die out completely if we don’t look after them.

“It makes me upset because I really like the environment and think we should all look after it.”

Jasmine, who is a member of the ‘Eco Council’ at her Lossiemouth school, added that she was inspired to pick up rubbish after her group had taken part in a school litter pick.

She added: “I was only doing a small thing to help but it could be a big help if more people looked after nature.

“If people didn’t drop litter I wouldn’t have to pick it up and it’d be nice and tidy for us and the animals.

“And if everyone took a spare bag out with them then they could help clean up instead of just ignoring the mess. Let’s just do something about it.”