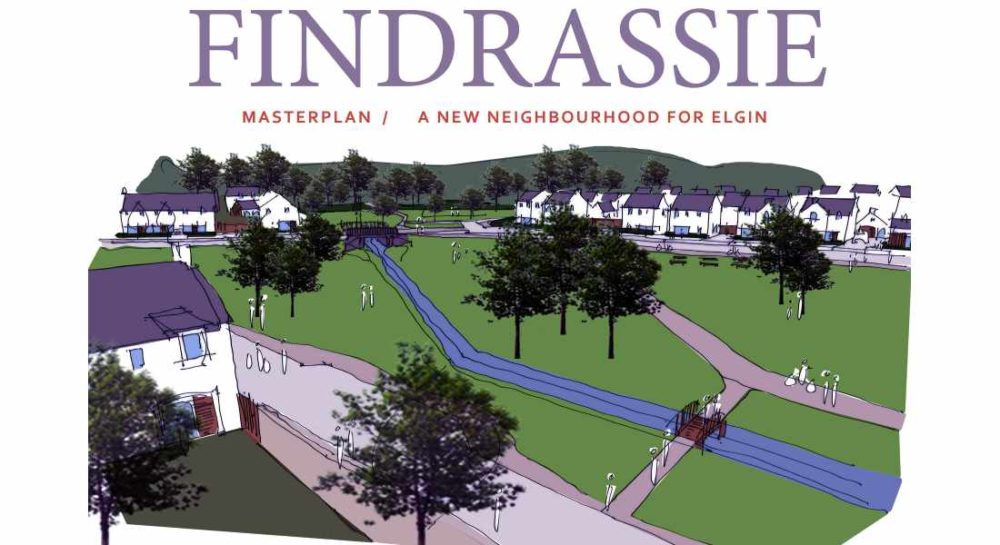 PLANS FOR MAJOR changes to the north of Elgin have been recognised for excellence in planning quality by the Scottish Government.

Rural businesses Pitgaveny have worked with Moray Council on the Findrassie Masterplan, an extensive development of 1500 homes, business units and a school.

Now their joint efforts have been awarded in the Partnership category of the Scottish Government’s Scottish Award for Quality in Planning.

The award recognises how the team behind the plan – the owners of Pitgaveny and their planning and design team, led by Debbie Mackay of Savills, in partnership with Moray Council, followed a careful and collaborative approach, which also involved future generations of Elgin residents.

Pitgaveny lies between the towns of Elgin and Lossiemouth, and is a family-run farming business owned by brother and sister, Crinan Dunbar and Rebecca Russell.

The Award scheme highlights innovative approaches to planning in Scotland and is hotly contested by planning authorities and consultants. Debbie Mackay, Savills Rural Planning Director said: “The team behind the Findrassie Masterplan are very pleased to have won this award.

“The standard of entries was exceptionally high, which is a positive reflection of the excellent planning and development work being undertaken in Scotland. A partnership approach has been at the heart of this Masterplan.

“We invited a group from the Elgin Youth Cafe to talk about creating a new neighbourhood for Elgin, while an illustrator transferred their ideas into a visual representation of the kind of living and working areas they wanted to see for their future, in their town: we used their ideas to inspire the designs.”

Head of Development Services for Moray Council, Jim Grant, commented: “What is different about the approach taken at Findrassie is the way in which the widest possible partnership has been fully embedded in the project from the outset.

“Not only have the Council and Pitgaveny worked incredibly closely on this masterplan but a particular emphasis has been on engaging with younger people in our town, the ones who will most likely live within the 1500 house neighbourhood being created over the next 20 years at Findrassie.”

Rebecca Russell, who is joint owner of Pitgaveny, said: “For many years now we have hosted visits from school groups, mainly from Elgin Academy and its primary schools, to observe and learn about our farming and environmental practices here at Pitgaveny.

“In recent years we have included visits and workshop sessions on the creation of a new neighbourhood at Findrassie. These included sessions on how houses and streets could be laid out, what kind of housing best suits the area’s needs, how people should move about, what schools and play parks might look like and what they should contain.

“It has been an enlightening experience for us, and for the Council’s planning officers who worked with us during these visits, to hear the imaginative insights that young people have into what a vibrant neighbourhood should include. They look 20, 30 and 50 years into the future.”

Chris Tuke, chair of Moray’s planning and regulatory services committee, said: “I would like to congratulate Pitgaveny on this award. The Estate has worked closely with the Planning Authority and local residents to bring forward a very high quality design for this proposed development.

“I would like to thank Pitgaveny for the close relationship that has been established with all parties involved. The developers are undertaking regular meetings to inform of future development which is also most welcome.”