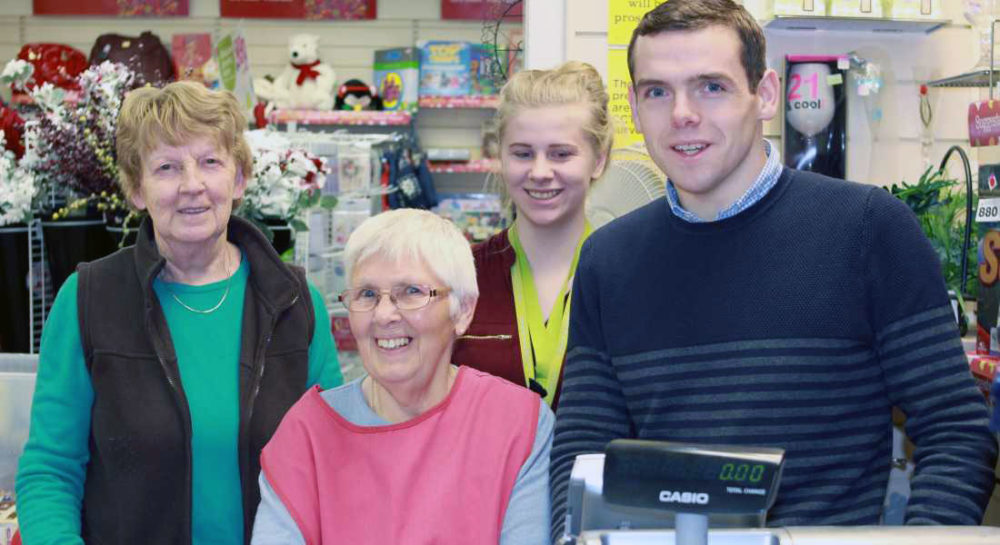 CUSTOMERS AT A MORAY charity shop will have been forgiven for thinking they had walked into the Scottish Parliament on Friday when they were met at the till by a well-kent face.

Regional MSP Douglas Ross was helping out at Barnardo’s shop in Elgin as he put aside his parliamentary duties for a short while and lent a hand for Universal Children’s Day.

Mr Ross was visiting the staff to find out for himself how Barnardo’s network of charity shops help them to maintain children’s services in Moray – and how that benefits children, young people and the local community.

The MSP said: “Barnardo’s is one of the most important charities supporting children and young people in Scotland through its network of 100 shops.

“This is a charity that works directly with over 26,500 of our children and young people in over 122 specialised community-based services throughout the country. Their work includes fostering and adoption services and support, helping children to break free from sexual exploitation, supporting young carers and helping children who are living in poverty.

“I was delighted to be able to join MSP’s around the country who on Friday helped Barnardo’s mark Universal Children’s Day.”

Universal Children’s Day was established by the United Nations General Assembly in 1954 to be a day of “understanding between children and to promote children’s welfare and children’s rights”.

UN Secretary General Ban Ki-Moon said: “This year, I wish to emphasise the importance of ensuring that the commitments made by the international community to the world’s children are extended to a group of children who are often forgotten or overlooked – those deprived of their liberty.”