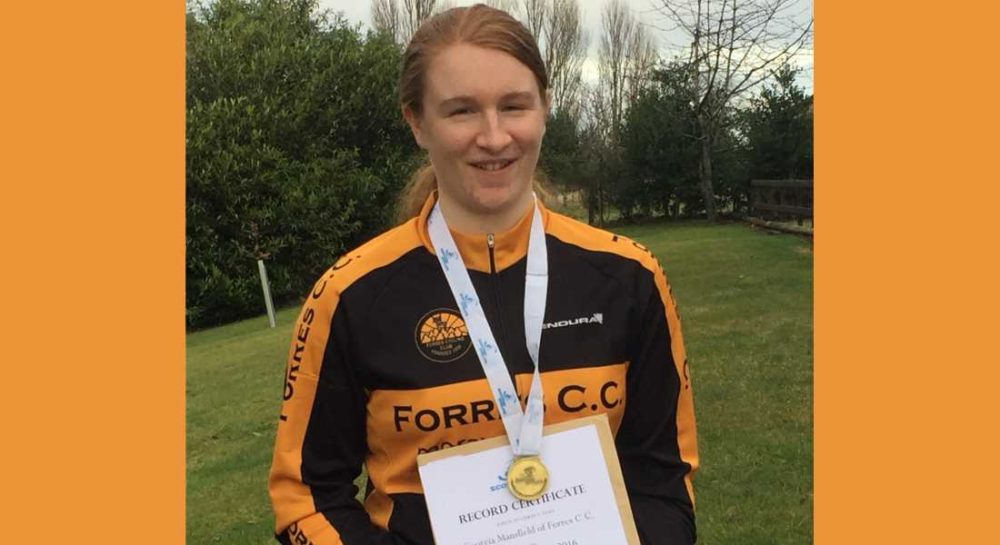 IT HAS BEEN a year of solid progress for Miltonduff cyclist Georgia Mansfield – and has ended on a very high note with the talented youngster receiving awards at the recent Scottish Cycling Roll of Honour ceremony.

It was the third year in succession that Georgia won the Best All Rounder (BAR) award for her Scottish Cycling racing classification – so confirming her position in 2016 as the fastest junior female road cyclist in Scotland.

Judged through competitive performances over the entire year, BAR is decided on the fastest times over several distances – and the fastest wins. It has been described in Scottish Cycling as “a real test of long-term training, extreme discipline and unfaltering endurance”.

While receiving her BAR medal this week, Georgia also received a certificate and trophy for beating the junior female record for the fastest time in Scotland over 25-miles.

A year of intensive training and competition did not quite finish perfectly for Georgia however – while out on her winter training schedule she crashed and broke her wrist three weeks ago!

Georgia said: “It is a little ironic that the roads have been more or less ice-free since, but that is the peril of road cycling. I’ve had to continue my training indoors since but have been able to increase my power output while doing so, it’s not all bad.”

Project Georgia – the team formed by Moray Wheelers to support Georgia’s efforts through fundraising her extensive travels – will continue their own efforts throughout the winter to ensure that their protégé is able to continue her considerable progress into 2017.

Anyone who believes that they can contribute through donations or help with travel and accommodation to Glasgow should contact Sheila Scott via Email to sheila@endhoose.demon.co.uk.