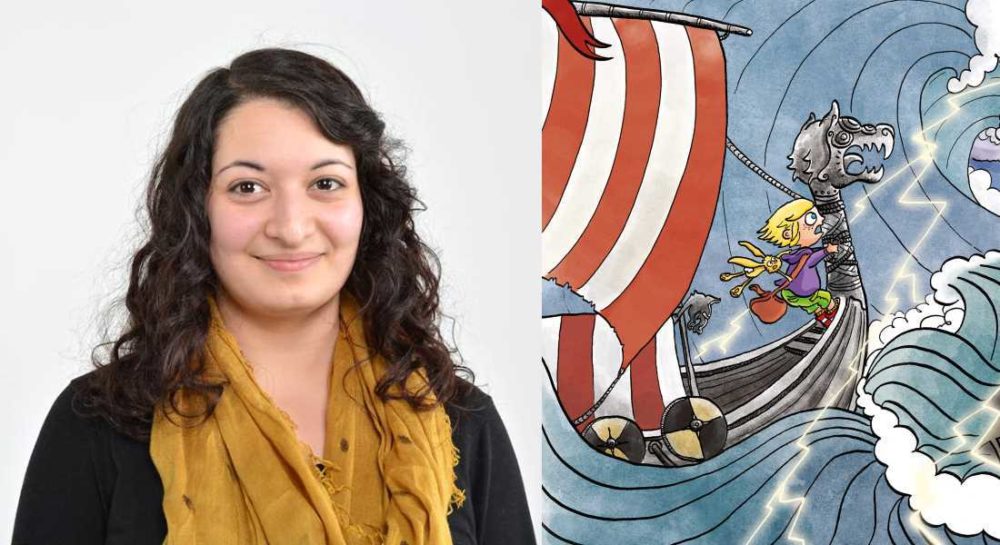 A GRADUATE ARTIST who grew up in Forres is celebrating her first work being published as part of a new children’s book.

Robert Gordon University graduate Shirin Karbor, 27, who was originally from Italy before moving with her family to Moray, pitched for the job as illustrator for ‘Katherine of Carrick’, a book by Annie Holmes who herself is a former RGU graduate.

Shirin graduated with an Honours Degree in Communication Design from Gray’s School of Art in 2014 and it was while studying she was given the opportunity, along with her fellow students, to pitch for the job.

The book focuses on Katherine who has just moved home to Carrickfergus, Northern Ireland. She embarks on a tale of friendship, time-travelling adventure and bravery in her mission to find girl pirates and outwit the book’s villain, the neighbourhood bully. Shirin has provided more than 100 black and white and 18 full-colour illustrations, which bring life to the characters and scenes within the children’s novel.

The book has a strong focus on historical accuracy and is written to encourage youngsters to become interested in the subject. It has been presented at the London Book Fair 2014, 2016 and again in 2017.

Shirin, who works as a freelance illustrator and graphic designer, was over-the-moon to be given the opportunity, saying: “The author approached our tutor, Annette Murray, with the project and a few of the class who were focused on illustration decided to go for it.

“I knew this wasn’t an opportunity that many people get, especially while still studying, and to have been selected was a huge surprise as I had seen the quality of my classmates’ work and what I was up against.

“I was able to use this as my final project for my degree and the whole experience from pitch to publishing has been amazing – working with the entire production team and the author so closely was invaluable for my personal and professional development. And, it’s a brilliant book!”

Annette Murray, who has continued to work with the author since this inaugural project, believes the quality of work being produced by her students merits the success Shirin has achieved.

She said: “I am so proud to see our students complete such a large scale project. Shirin won this commission whilst a student studying at Gray’s and it is fantastic to see the finished book, which has been a mammoth task that she completed following graduation.

“Working with clients such as Katherine of ProjectPublish has been an extremely rewarding experience for our students, where they have been able to test out their ideas in a professional context and develop skills to prepare them for working in industry.”

Katherine Holmes, from ProjectPublish, said: “ProjectPublish has been most fortunate to work with the Gray’s Art School students on various projects.

“It is a mutually beneficial exchange of new creative skill and work experience that enhances their CVs to make them more competitive in the work place, and showcases their work to a broader audience. We recently sent out an order for the book to the Australian Library Service.”

Katherine of Carrick is now available to buy online. You can view a preview of the book here.