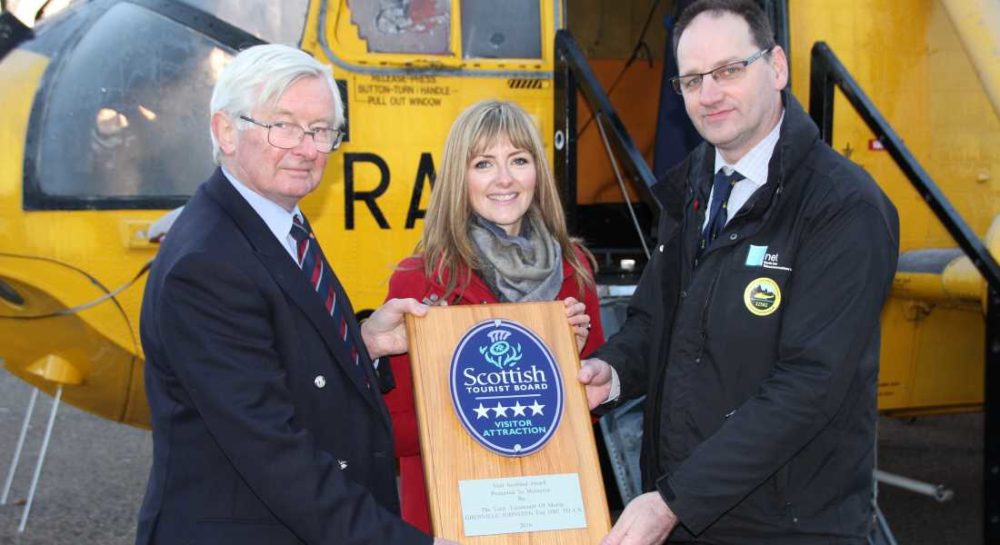 THE FAST GROWING collection of exhibits that have made Morayvia one of the most exciting projects seen in Moray for generations is set to include an RAF icon.

Dozens of dignitaries joined volunteers from the Science and Aviation attraction in Kinloss on Tuesday to celebrate its being presented with four-star attraction status by VisitScotland.

The event was also used by Morayvia chairman Mark Mair to announce an exciting new arrival he hopes to see returning to Moray soon – a Sepecat Jaguar, the RAF’s frontline jet that first arrived at RAF Lossiemouth in 1973.

All being well an example of the Jaguar will join Morayvia’s outstanding collection celebrating the rich aviation history of the region, including star attractions such as the Sea King and Nimrod.

Just a year from first opening at the former Kinloss primary school, Morayvia has been recognised by VisitScotland as one of the premiere visitor centres in Scotland.

After handing over a plaque to mark the new status to Moray’s Lord Lieutenant Grenville Johnston, a long-time supporter of the Morayvia project, VisitScotland regional director Jo Robinson said: “This area has a strong military history anyway so it is definitely going to draw that type of visitor – but I think having something like Morayvia as a centre for all that existing expertise will appeal to the military mindset anyway.

“But it is also a great attraction for families, the kids love coming here and being able to climb into the machines and see how they work – it is so interactive.”

Among those attending the presentation was Douglas Ross MSP, who said: “I was delighted to be invited to attend the ceremony at Morayvia having watched this project develop over the years to where it is today.

“The centre at Kinloss is a first-class attraction bringing visitors in from all over the country and beyond and the award from Visit Scotland is a fitting tribute to the hard work and dedication of the volunteers who make up Morayvia led by chairman Mark Mair.

“It is little over a year since the site opened to the public and the team have done fantastic work transforming the former school building into what is now a very much hands on interactive tourism experience. I look forward to following the project as it continues to develop and wish all those connected with Morayvia the very best for the future.”

Mark Mair spoke of his pride at the progress made since the idea of establishing a centre in Moray was first suggested shortly after the RAF moved from Kinloss. Many of those behind the venture are themselves former RAF airmen and women who remained in the region at the end of their service – and have continued to make a major contribution to the rich diversity existing in Moray today.

Looking to the future, Mark said: “I think the sky is the limit, and for us it is down to the people, the community spirit and the backing we receive from Moray.

“Every week now we come up with something new or are trying to deliver something new. We have possibly acquired a Jaguar jet that will be coming here next year, so another former Lossiemouth based aircraft for our collection.”

While the distinctive Jaguar has not been seen in Moray since 2000, the aircraft continued in service with the RAF until as recently as September this year, when the final examples were taxied into hangers for the final time – some are still being used at the Shropshire base to aid the training of the next generation of RAF engineers.