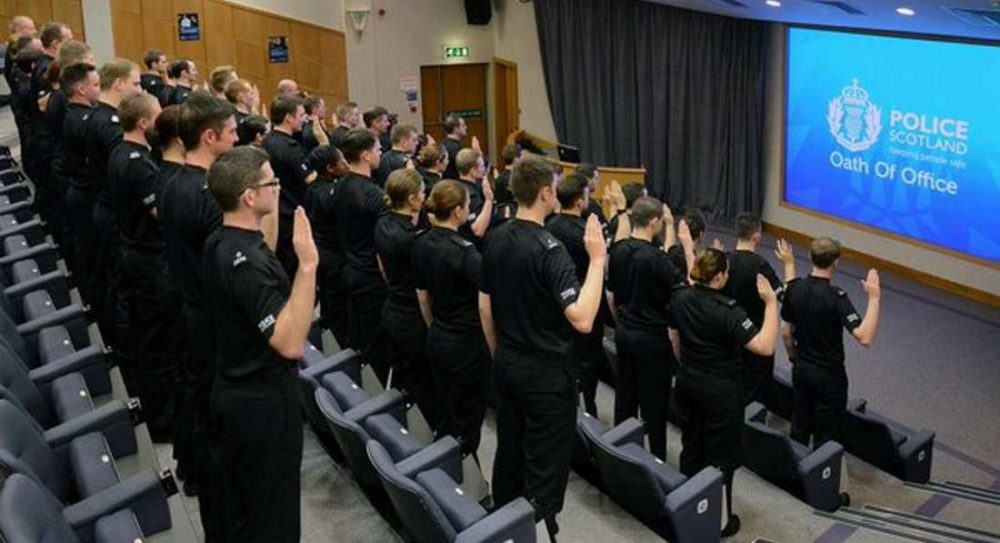 A NEW PROGRAMME has been launched by Police Scotland to encourage potential recruits from black and minority ethnic (BME) backgrounds.

Currently midway through the first Introduction to Policing course over fifty potential recruits have met with Chief Constable Phil Gormley at the Scottish Police College.

Delegates also heard from two of Scotland’s most senior BME officers, Superintendent Thom McLoughlin from G Division (Greater Glasgow) and Superintendent Faroque Hussain from U Division (Ayrshire), who spoke about their decisions to become police officers as well as their careers.

Applicants also attended workshops on divisional and probationary training, and the work of CID and the Operational Support Division.

Attendees from a range of backgrounds, cultures and religions, including Russian, Pakistani, Turkish, Polish, Syrian, African, Lithuanian and Spanish, as well as Sikh and Muslim, are all hoping to submit successful applications to become either regular Police Constables or Special Constables in the near future.

The four-week programme, which is the first of its kind in Scotland, will enhance potential candidates’ knowledge of Police Scotland’s application and selection process, help gauge their current physical fitness and enable people to gain a better understanding of day to day policing functions.

The expectation is that attendees will be better prepared to succeed in their application to join the service having completed the course.

Accompanied by their families, potential applicants toured Police Scotland’s highly rated facilities and were once more put through their paces in a practice session of the Bleep Test which is used to assess recruits’ fitness levels.

Chief Constable Gormley said: “Police Scotland is lucky to enjoy a strong position of support across the country as we police by consent. We need to remain relevant and recruit the broadest range of people possible to ensure our service is as representative of our communities as possible.

“We can only continue to do this if our service learns from these communities and the best way to do this is by people from different ethnic backgrounds becoming officers and sharing their knowledge, wisdom and culture with their colleagues.

“Many people consider about becoming a police officer but think it’s not for them for a variety of reasons – be it concern around having to improve their fitness or fear their decision won’t be supported by family and friends.

“This is where those attending the Introduction to Policing course have a crucial part to play by acting as trailblazers for others in a similar situation – they can all be role models and play their part in making Police Scotland diverse, open and representative.

“This project by the Positive Action Team in our Recruitment department is a great initiative to encourage people from every ethnic background in Scotland to consider a career in policing, and I very much hope the programme encourages people to sign up to what I think is the best job in the world.”

The group came together for the first time last weekend at Garscube Sports Complex in Glasgow to learn about the application process and officer safety training, and will come together again over the next two weekends to enhance their knowledge.

There is no upper age limit for joining Police Scotland – more information on becoming a regular officer or Special Constable can be found online.