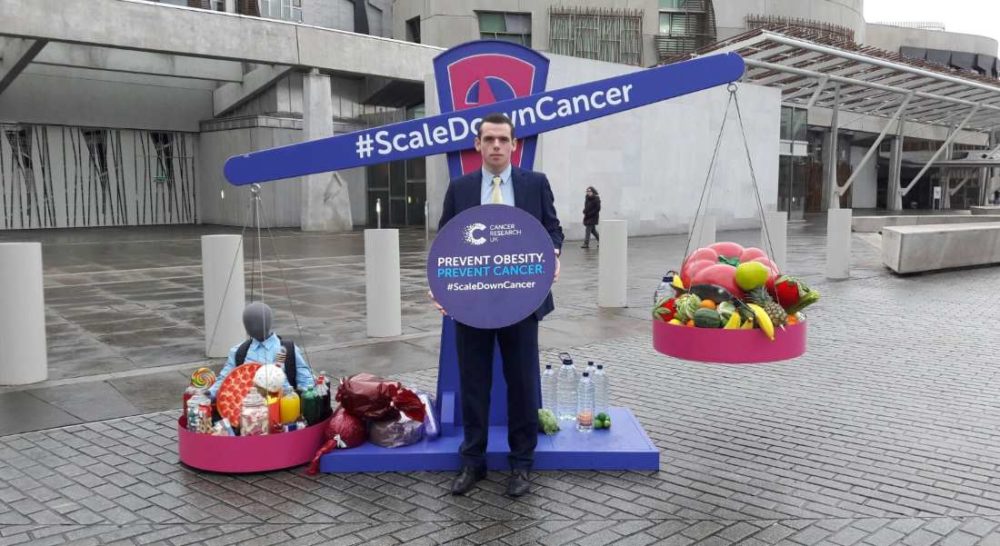 A GIANT SET of scales has been placed outside the Scottish Parliament – weighed down by a mannequin of an obese child in a XL-sized school uniform.

The ‘shock tactic’ is being used to launch Cancer Research UK’s ‘Scale Down Cancer’ campaign which they hope will help prevent obesity-related cancers in Scotland.

Scotland has one of the heaviest populations in Europe, with two in three adults in Scotland overweight or obese – a new survey commissioned by Cancer Research UK reveals that seven out of ten Scots support a ban on supermarket multi-buy promotions of junk food.

Their Edinburgh launch attracted the attention of regional MSP and Moray councillor Douglas Ross, who has pledged his support for the campaign, launched as six in ten people in Scotland say they buy unhealthy food on promotion at least every week – and eight in ten Scots agree the country has a problem with obesity.

Cancer Research UK is urging the Scottish Government to do more to tackle obesity and prevent cancer by restricting supermarket multi-buy discounts that are high in fat, salt and sugar.

Gregor McNie, Senior Public Affairs Manager at Cancer Research UK, said: “Levels of people who are overweight or obese in Scotland are the worst in the UK and our shopping habits are at the heart of the problem.

“We know that sugary drinks and snacks are more likely to be discounted than healthier foods. Our survey shows people are being attracted by these promotions, something which is setting them up for a lifetime of ill-health.

“We need urgent action now to prevent thousands of cancers in the future.”

Douglas Ross commented: “Four in ten cancers are preventable, yet not enough of us recognise that obesity is the single biggest preventable cause of cancer after smoking. Given the devastating impact that cancer has on families throughout the Highlands and Islands, it’s vital we take action on obesity.

“We mustn’t let obesity continue to be the new norm in Scotland, and that’s why I’m joining forces with Cancer Research UK and the Scale Down Cancer campaign. I am staggered at the figures the survey has highlighted and I know myself through participation in sport the importance of eating a healthy well balanced diet.

“Cancer is something which touches almost every family at some point and I very much hope that people across the region will join this campaign to encourage others to think twice about their buying habits.”