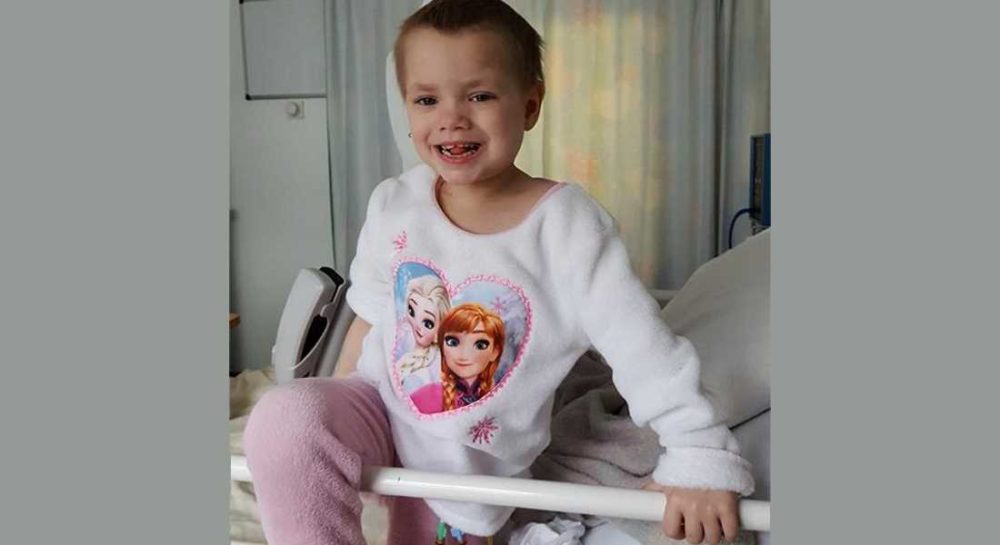 FAMILY AND FRIENDS of Moray youngster Eilidh Paterson have been left devastated this week by news that her cancer had returned.

Eilidh has captured the hearts of thousands from around the world as her fight against the childhood cancer neuroblastoma has been monitored with daily updates from her mum.

Two years ago, with Eilidh in remission, an appeal raised over £100,000 to send the Forres youngster for treatment to the United States that would hopefully make it more difficult for the cancer to return. However, after travelling with her family over the Atlantic for several treatments the cancer did return in May last year.

The four-year-old underwent further intense treatment and hopes were raised again for a brighter future – but this week her mum Gail Paterson had to break the news that the cancer had returned once again – with doctors holding out little hope of a recovery.

Gail told the over 8500 followers on the ‘Eilidh’s Journey’ Facebook page yesterday : “This has been the worst week of my life and the most heartbreaking update I’ve done. I’ve been trying to put it into words but those words are not very forthcoming so please bear with me. It’s back.

“A week ago past Friday, I found a lump under Eileidhs jaw on the bottom left hand side, the same area as her previous two tumours.

“After looking in her mouth, I noticed that one of her adult molars had begun coming in, which looked like it was crushing her back teeth and has made her new adult bottom front teeth go squint, so I was hoping and praying it was either an abscess or infection caused by the new tooth.”

Gail brought the lump to the attention of doctors a few days later who ordered an MRI scan which revealed that a tumour was wrapped around Eileidh’s lower mandible. Further tests revealed the tumour growing quickly, with Gail adding: “Devastatingly, there are limited options for Eileidh.

“She will begin chemotherapy in the morning for five days, then will have roughly 21 days break to recover before possibly having a 2nd block. In total Eileidh is able to have 12 blocks of this chemo combination if needed.”

Gail reported that there were hopes that Eilidh might be eligible for a new cell trial when they reopen for new patients at the end of this month, but devastatingly she added: “Basically, we were told that there is no ‘cure’ for Eileidh as no matter how harsh the treatment has been, it is still finding a way to come back and we are running out of options.

“They are trying every treatment possible for her but to be blunt, she may have a few years but it may be less – unfortunately, they cannot give us a time scale but they do not expect Eileidh to survive.

“As you can imagine, we are completely heartbroken at this news. We’ve always known it was a possibility but we never actually expected it to come to this – my beautiful, happy, smiley, lovable little girl has endured more pain and horrific treatments than most people will have in their lifetime, yet she still runs around smiling, causing mischief & making everyone who meets her fall in love with her.”

Earlier today Gail reported Eilidh had completed the first of her five-day chemotherapy treatment, but reported that her jaw was “still growing at a rapid rate”, but typically that did not halt her from charging around the hospital ward with a friend and causing general chaos.