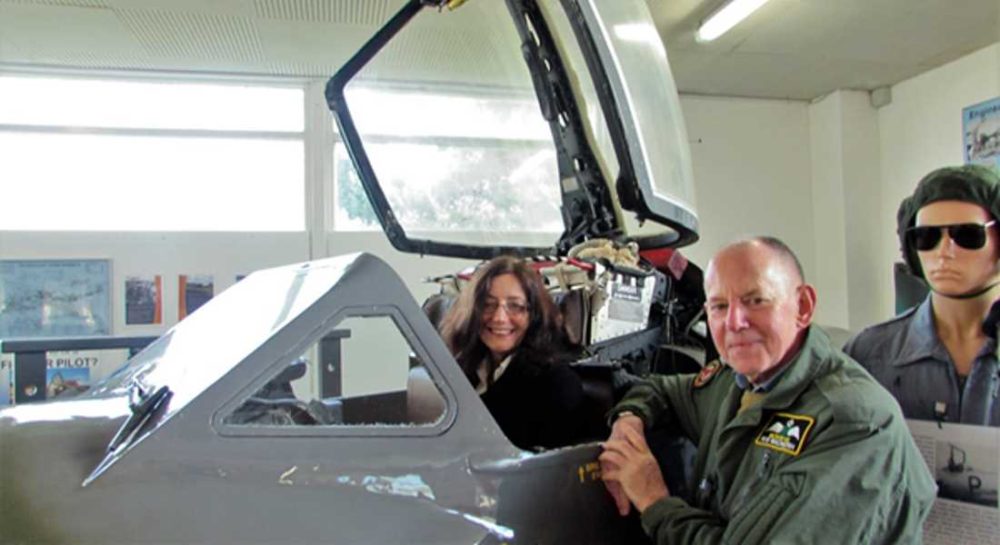 THE CHIEF EXECUTIVE of Highlands and Islands Enterprise (HIE) found the time to get up close and personal with some of the exhibits at Morayvia this week.

Charlotte Wright, who is currently the interim chief executive, visited the interactive aerospace education and visitor centre at their Kinloss premises.

Morayvia is run entirely by volunteers and has been supported by HIE – so it was time for Ms Wright to learn more about how successful the project has been, marked by its four-star VisitScotland Award status.

She was joined by Morayvia board members Margaret Yates, Lynne Herbert and Bob Pountney along with CEO Stan Barber. They briefed Ms Wright on the organisation’s history, from its formation in 2011 to the centre’s formal opening by the Lord Lieutenant of Moray, Grenville Johnston in 2015.

Volunteers were working on preparing more exhibits such as the Antonov and the Jet Provost cockpit. The Antonov will be presented as a paratroop training aircraft in Russian colours – complete with Red Stars and Cyrillic lettering.

The Jet Provost cockpit is being prepared for painting, with spraying courtesy of Gordon’s Bodyshop at its premises in Forres. Ms Wright was also shown the intricacies of the Vampire T11 aircraft by volunteer Pete Macintosh, a former RAF Red Arrows pilot who had flown the actual aircraft on display during pilot training.

“It also contributes to strengthening communities and preventing social isolation through its work hub. This provides a significant social and support network for volunteers not only ex-service personnel and their partners but also for a growing number of civilians.

“I am pleased HIE has been able to support the project. I look forward to hearing how Morayvia continues to consolidate, expand and develop its centre whilst progressing plans for a modern, energy-efficient, purpose-built centre.”