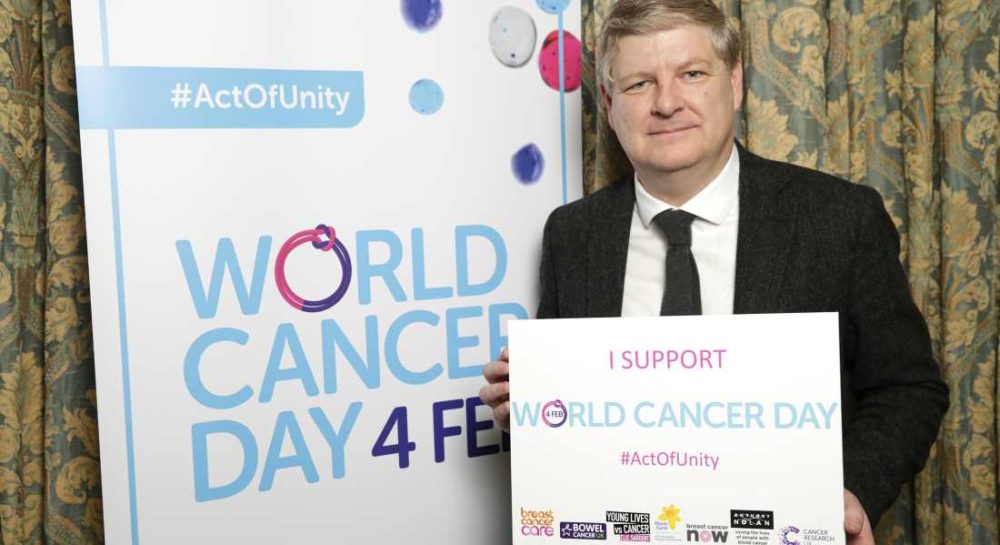 PEOPLE IN MORAY are being encouraged to unite in the fight against all forms of cancer by marking World Cancer Day and helping raise vital funds for life-saving research.

In the last ten years the overall mortality rate for cancer has seen an 11% reduction in Scotland – but the battle is far from over.

While significant financial support is being invested by the Scottish Government, the fight is one that many people can and do contribute too – few of us have not been touched at some time in our lives by family and friends who have suffered.

Now Angus Robertson MP has met with representatives from seven of the UK’s leading charities who are seeking to united the nation and help those affected.

By joining forces, the charities will make a bigger impact in transforming the lives of millions who are affected by cancer. The Unity Bands are made of two parts, knotted together, to symbolise strength in unity and the power of what can be achieved when people join forces.

Mr Robertson said: “I’m calling on people in Moray to join me by wearing a Unity Band, making a donation or spreading the word on social media in support of World Cancer Day.

“Whatever your motivation – to remember a loved one, celebrate people who have overcome the disease, or to rally in support of those going through treatment – World Cancer Day is a focus for people to get involved and transform the lives of millions of people who are affected by cancer.”

The bands are available from each charity on their websites, shops and other retail outlets for a suggested donation of £2. All money raised from the Unity Bands will go towards the charities individual work.