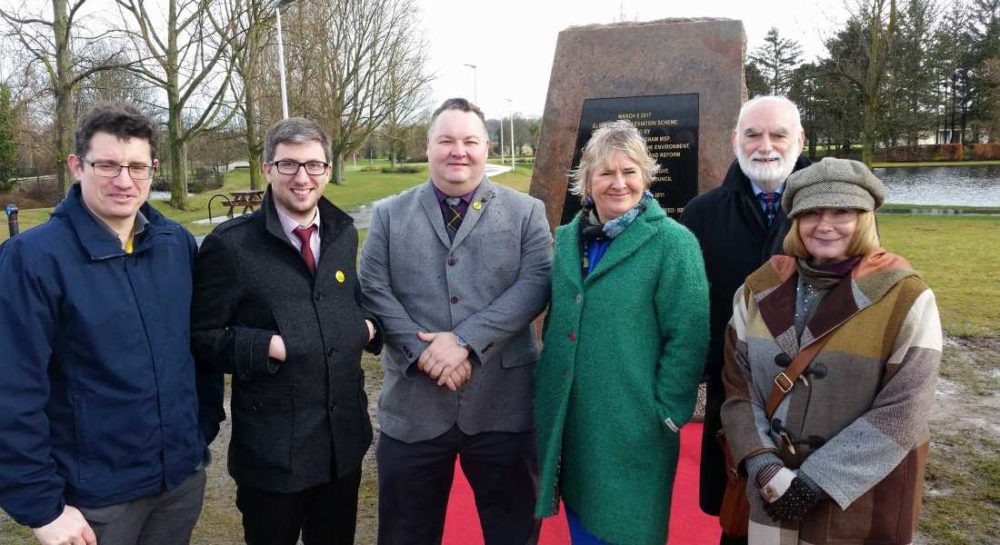 THE MOST AMBITIOUS EVER flood alleviation scheme in Scotland was brought to a close yesterday with a formal opening in Elgin.

Costing £86million, the Elgin Flood Alleviation Scheme has taken just short of five years to complete – but it is hoped that it will provide many years of protection for local communities.

Environment secretary Roseanna Cunningham MSP performed the final act of what has at times been a controversial plan to protect the town from floods, unveiling an 8-foot tall marble slab on the banks of the River Lossie in the company of Moray Council convener Allan Wright.

Ms Cunningham said: “Flooding can have devastating consequences for communities, businesses and individuals.

“I am therefore delighted to be here today to open this new scheme which will provide lasting flooding protection for around 1130 homes and businesses in Elgin. The Scottish Government is committed to reducing flood risk across Scotland and will continue to make available £42million a year to fund important projects such as this to protect communities most at risk of flooding.”

Acceptance that such a scheme was required came when families were forced to flee their homes as three major floods hit the town over the space of just 12 years. The new scheme was devised by creating a series of embankments and flood walls, allowing flood water from the Lossie to pass safely through the town.

A lowering of the flood plain was also carried out during the works, with two new footbridges and a road bridge now spanning the river.

Councillor Wright said: “Today’s historic ceremony is taking place on the banks of a river which may appear benign but which, in 1997, 2002 and again in 2009, brought misery to the people of Elgin and caused tens of millions of pounds of damage and destruction.

“The flood scheme represents the biggest single civil engineering project ever to have been completed in Moray and it has already gone part of the way in paying for itself.

“In August 2014, when work was still only partially completed and following a period of very heavy rainfall, it prevented what would certainly have been yet another catastrophic flood.”

Councillor Wright acknowledged the 70% contribution to the costs of the scheme that came from the Scottish Government, adding: “The completion of this project, as marked by today’s ceremony, also represents the completion of an unprecedented programme of flood alleviation schemes implemented by Moray Council.

“[This was] all funded to a very generous extent by the Scottish Government – which has seen not only Elgin spared the ravages of future flood events, but also Forres, Rothes and Lhanbryde, which have also had more than their share of flooding in recent years.”

Last night Moray MSP and former Environment Secretary Richard Lochhead welcomed the formal opening, saying: “It is absolutely fantastic to that the Elgin Flood Alleviation Scheme has now been officially opened by the Cabinet Secretary.

“The flood scheme is one of the biggest in Scotland and will deliver valuable protection to hundreds of homes and businesses in Elgin, which I know will be a big comfort especially to those who have been badly affected by flooding in recent years.

“Having been involved in the campaign to deliver a flood alleviation scheme for Moray, I’m delighted that the project which received substantial investment from the Scottish Government is complete and already benefitting families throughout Elgin.”