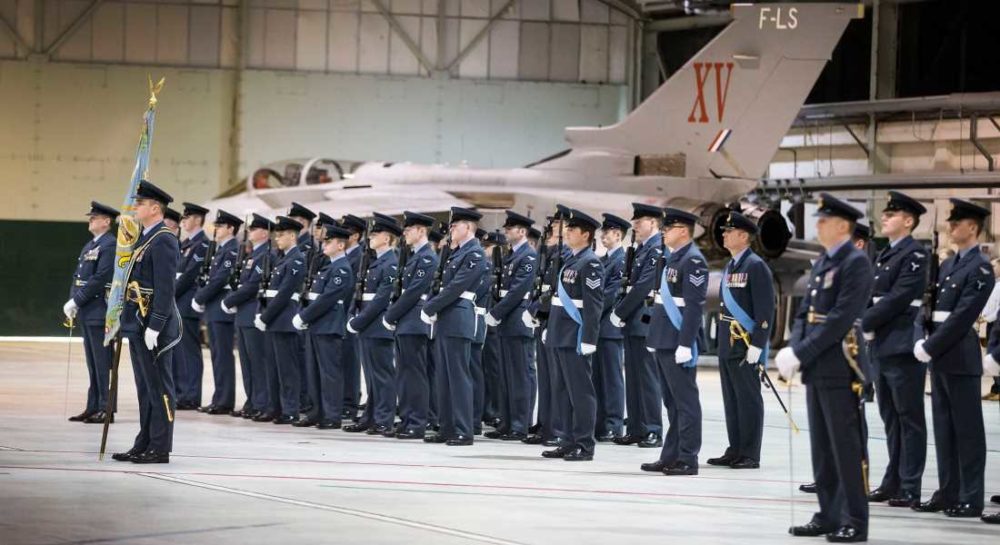 FAMILIES AND FRIENDS joined XV(R) Squadron personnel at RAF Lossiemouth yesterday to mark the disbandment of the squadron that has been an integral part of Moray life for over two decades.

Squadron personnel were led by the band of the Royal Air Force College into a hanger where they lined up flanked by two of the Squadron’s Tornado aircraft.

Reviewing the parade was Air Marshal Phil Osborn, who was a Tornado navigator and former squadron CO. He told guests: “I’m honoured and privileged to be here for the disbandment of XV(R) Squadron after its 102 years of loyal service.

“But today, whilst our feelings obviously include sadness we know that this magnificent event is also a celebration; a celebration of history and tradition, and of service and professionalism in the service of the nation.

“XV(R) Squadron has an illustrious history and reputation with battle honours from the Western Front in World War I, western Europe in World War II, and Gulf War I – and since World War II the proud guardian of MacRobert’s Reply.”

”XV(R) Squadron has delivered an exceptional operational performance. From air crew, engineers and support staff, unprecedented effectiveness and dedication of which you should be rightly proud.”

Following the parade XV(R) Squadron CO, Wing Commander Paul Froome, paid an emotional tribute to the members of his Squadron: “I am incredibly proud today – members of XV(Reserve) Squadron have provided a stirring finale to the Squadron’s history – and to be able to share today with many past and present members of the Squadron, as well as our families, has been wonderful. “The hours of dedicated work the Squadron engineers have provided to the Tornado Force over recent years has been replicated in their efforts today in this arena. It was an absolute honour to lead them through today’s parade, and I will be sad to leave them and RAF Lossiemouth.”

Following the formal parade several flypasts of the base were undertaken by four Tornado aircraft from RAF Marham, the home of the final squadrons until they are withdrawn from service in two years.

A final tribute was paid to the Squadron by RAF Lossiemouth’s Station Commander, Group Captain Paul Godfrey, who said: “I’m extremely honoured to have been the Station Commander of RAF Lossiemouth in the last 18 months of XV(Reserve) Squadron’s time as a Tornado Operational Conversion Unit and it is a sad day to see the Squadron officially disband, ending over 23 years of Tornado presence in Moray.

“The Squadron’s output in terms of quality training that has provided the RAF with such skilled air crew has been second to none and has been fundamental to the success of the Tornado on operations.

“All of the Squadron’s members on parade today have made a huge contribution to past and current operations worldwide and are highly regarded for their professionalism and skill. That same high standard of output and effort has been shown again today in an excellent parade, which was a fitting end to the Squadron’s time here at RAF Lossiemouth.

“I am extremely pleased that many of the Squadron personnel will transfer to our Typhoon squadrons here at RAF Lossiemouth to support the future growth of the Station, and I wish all members of the Squadron the very best of luck in their future endeavours.

“Every single one of them can have with a real sense of pride in what they have achieved and it is obvious that they have maintained the very highest of standards right to the very end.”