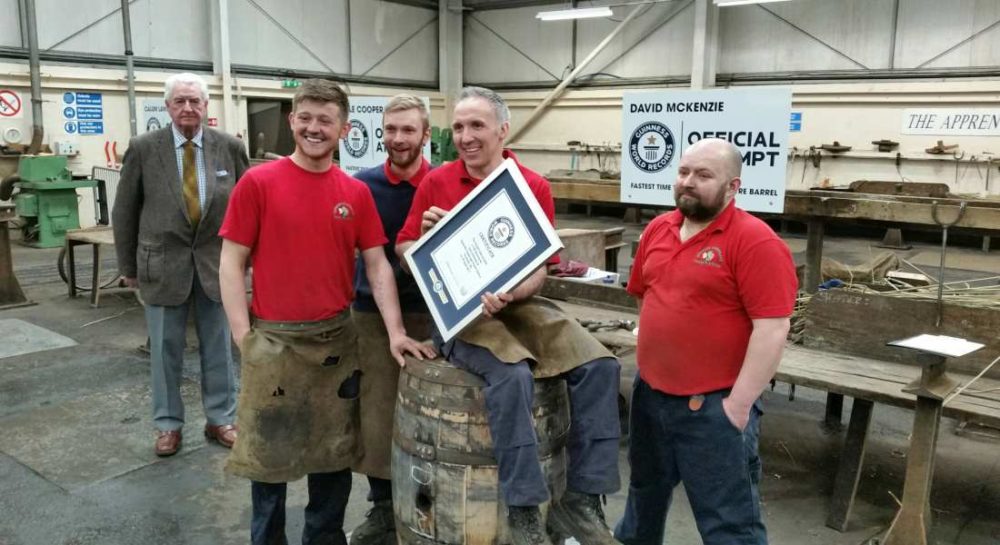 A new world record was set in Moray at the weekend – and Eddie Stuart was on hand for insideMoray….. THE 70TH ANNIVERSARY of Speyside Cooperage and 25th of the innovative Visitor Centre has been marked with a new Guinness World Record.

Coopers at the Craigellachie site have set the fastest time to build a 190litre barrel as part of the Spirit of Speyside whisky festival at the weekend.

The idea came from visitor centre manager Gill Reid, who approached Guinness World Records who were themselves surprised to find that no record had ever been set – but they were delighted that the Cooperage would set one.

So Jack Brockbank of Guinness World Records was in attendance on Saturday to adjudicate and explain that as no record currently existed, they had researched the industry and discovered that a skilled worker under normal circumstances would take around eight minutes to complete the job.

So they set a deadline time of seven and a half minutes – which had to be beaten for the attempt to be recorded. Four Coopers were up for the challenge – Calum Lawson, Kyle Cooper, David McKenzie and Brent Bowie. A large crowd cheered them on led by Moray’s MSP Richard Lochhead as master of ceremonies. It was clear early on that they had completed the task well within the time – but they had to wait while their casks were taken to a safe area for pressure testing to ensure that they were built to industry standards and were leak-proof.

After a tension-filled period the result came in – and all four casks had been completed inside the time to create the new record – the fastest being completed by David McKenzie who is now the proud holder of a world record time of three minutes and three second – all four Coopers having finished inside four minutes.

A modest David insisted however that someone, somewhere would doubtless now be trying to beat his record – but that would simply spark another bid at the Speyside Cooperage to win it back again, and no matter what else happens the very first record will always belong to David and Speyside Cooperage.