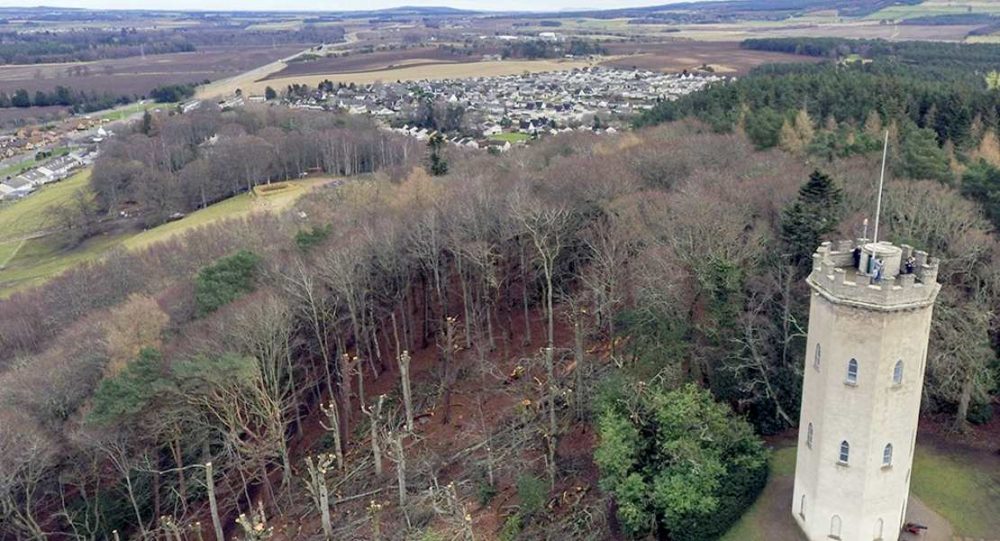 A MORAY LANDMARK is to become the centre of an archaeological dig which will tie in with Moray’s biggest one day event.

Cluny Hill in Forres, which is topped by the famous Nelson’s Tower, has recently been confirmed as the site of a much older historical monument.

Now Dr Leif Isaksen, who grew up in Forres and is now a Senior Lecturer at Lancaster University, is returning to his hometown as part of a community excavation to learn more about what may be an Iron Age hill-fort.

The dig brings together local and international archaeologists, along with a large team of volunteers, and will be open to the public as part of Piping At Forres, the European Pipe Band Championships.

Leif said: “We are very excited to be carrying out a community research project at Cluny Hill. It is a wonderful place to be working, with beautiful views across the Moray Firth. If size is anything to go by it could be one of the most significant hilltop sites in the northern Scotland.

“Dramatic changes to the landscape over the past two centuries meant that the earliest traces of human activity on Cluny Hill have all but faded from view. We very much hope that this project will inspire people to learn more about Forres and its fascinating history. The excavation has been timed to fit in with Piping At Forres and it’s a huge pleasure to be involved.”

Leif and his colleagues will form part of “Have A Go Row” at Piping at Forres which is supported by title sponsor Benromach Speyside Single Malt Scotch Whisky and supported by EventScotland, part of VisitScotland’s Events Directorate.

Have A Go Row is made up of around 10 different interactive stalls. The archaeologists will be using the latest 3D and laser-scanning technologies to reveal the hill’s secrets to the public, and will run guided tours around the hill during the day.

Leif added: “We are still finalising our programme of activities at Piping At Forres, but we are certain that visitors will have their eyes opened to the ancient history beneath their feet.”

Joanna Taylor, one of the directors of event organisers Forres Event Ltd., said: “I am delighted that Leif’s plans for an excavation on Cluny Hill are going ahead, and that his team have decided to coincide the dig with Piping At Forres.

“This is a welcome addition for us and will provide another fascinating element to the event, particularly as Piping At Forres is part of Scotland’s Year of History, Heritage and Archaeology 2017.”