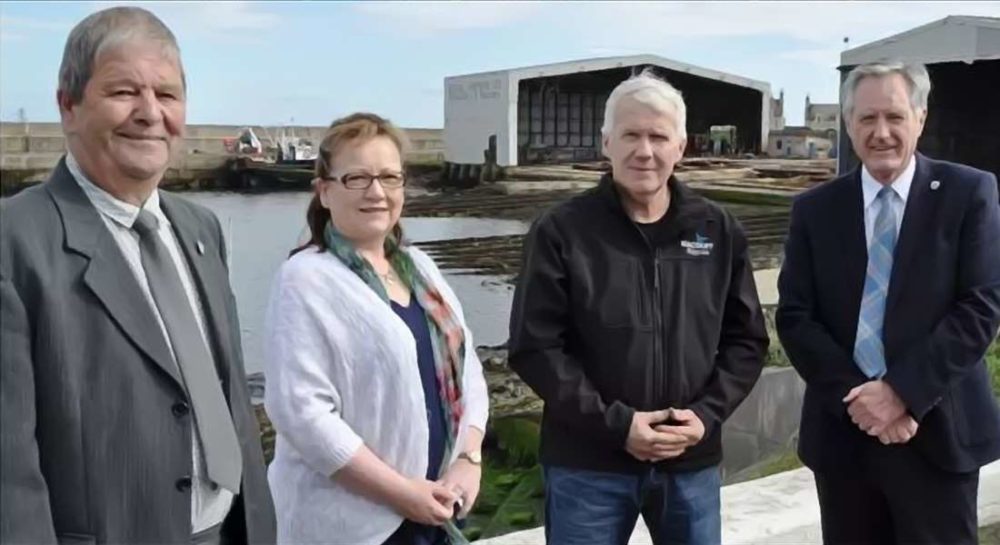 THE SALE OF BUCKIE Shipyard will lead to the relaunch of boat building in the Moray town according to its new owners and council leaders today.

Moray Council has confirmed that the shipyard has been purchased from them by Macduff Shipyards Ltd, the local authority having been seeking a new owner since the Buckie site went into liquidation over three years ago.

It is now hoped that the revival of the yard will help to unlock the harbour’s potential as a service and maintenance base for offshore renewables, Buckie being ideally placed to service the Beatrice Windfarm currently being developed on the Moray Firth.

Macduff Shipyards, founded in 1940, employs 210 people – 35 of them apprentices – at Macduff, Fraserburgh and its existing site on Buckie’s Commercial Road, which they purchased in 2013 and from which 20 staff operate.

Recent work at the Buckie site has included the construction of the Moray Council owned dredger MV Selkie, the launch of the fishing vessel Asteria (see report earlier today) as well as the construction of several barges and landing crafts for the aquaculture sector.

Managing director John Watt said today: “We see a great potential in Buckie harbour in the future. We have been providing a restricted service to the marine sector in Buckie these last three years, just launching a 19m fishing vessel which, although it is the fifth vessel we have launched in Buckie, is the first large fishing vessel to be built in the town in 15 years.

“Work has also started on the next fishing vessel in Buckie for Steven Clarke and partners as a replacement for the Caledonia , and the additional space will allow us to cater better for the Moray Firth inshore fleet as well.

“The slipways at Macduff and Fraserburgh are working close to capacity and we intend to build a facility that will complement other facilities and be able to slip heavier and wider vessels that cannot presently be accommodated in the north-east. We are hoping to have this up and running for summer 2018.”

It is anticipated that the acquisition of Buckie Shipyard will lead to a considerable increase in jobs as the site develops in coming years, with Mr Watt saying: “Once the site is fully operation we believe it will complement the council’s vision of Buckie being an operations and maintenance port for any future offshore wind opportunities.”

Earlier today Councillor John Cowe, chair of the economic development and infrastructure committee, said the sale was “hugely significant” for the future of Buckie harbour as a commercial and industrial asset.

He added: “This is very welcome news not only for Buckie but for the whole of Moray and its economy. Building ships is part of Buckie’s heritage and it is great to know that tradition will continue thanks to Macduff Shipyards, whose reputation within the industry is second to none.

“Their acquisition of Buckie Shipyard will enhance the prospects of the Buckie harbour area being able to diversify and take advantage of the massive opportunities that the offshore renewables industry, in particular, will offer.”