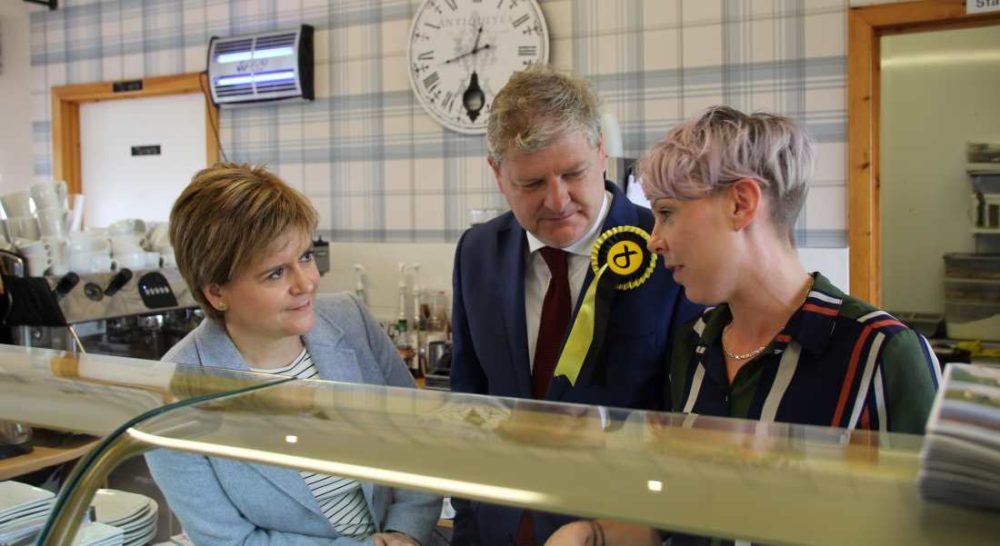 ANGUS ROBERTSON HAS insisted that Scotland’s fishing industry has always been a low priority for successive Conservative governments – and always will.

Speaking to insideMoray during the visit of party leader Nicola Sturgeon to Moray yesterday, the SNP candidate is convinced he will return to Westminster as the region’s MP – because people know that he is the only candidate that will be taken seriously.

“People are rightly cynical about the Tories and their track record on fisheries, we should not forget that it was one of the last Tory MPs for Moray who signed away the fishing industry as being expendable,” the SNP’s deputy leader said.

He continued: “The SNP in contrast has resolutely supported the fishing communities and fishing. The UK is planning to ‘repatriate’ the Common Fisheries Policy into UK legislation – we were told during the EU Referendum that if people voted leave all powers for fisheries would return to Scotland, but it has been clear that is not the case so if people wish to stand up for fishing communities then they should vote for the SNP on June 8.

“They are prepared to use it as a bargaining chip in European negotiations towards Brexit and I think that is unacceptable, fishing should always have been taken seriously.

“The fishing industry in Moray has almost completely disappeared – there are more jobs in onshore fish processing in Moray than any other part of the sector. Shellfish is also exported in the European market which is why we focused on trying to protect Scotland’s place in Europe.” Adding that he was yet to meet a single person in Moray who voted either to remain or leave the EU who is in favour of the “most extreme form of damaging Brexit that the UK Government is heading towards”.

He said: “One thing that the SNP has worked very hard at in the last two years is to work as the effective opposition [in Westminster] and as leader of the third party in the House of Commons I’ve always questioned the Prime Minister on the issues that actually matter.

“The choice Moray faces given it is a two-horse race between myself, who has represented this area for 16 years as a high-profile parliamentarian, or a part-time Tory back-bencher who will not be listened to or taken seriously by anybody.”

Switching to another subject important to Moray, Mr Robertson said that contrary to claims he has always welcomed investment in conventional defence. “At the same time I think it is important to understand the fact that the Tories have tried to close or downsize military facilities in Moray and in the north of Scotland generally. If people wish to stand up for strong conventional defence they should vote for the candidate who has a consistent track record standing up for conventional defence, and that is me.

“My political opponent has said and done absolutely nothing to protect Fort George, pretended that there was not a risk to Kinloss when he sat in meetings with me when he was told there was a risk.

“And he has only recently discovered the importance of Maritime Patrol Aircraft – although it was his party in government that scrapped the Nimrod fleet and closed RAF Kinloss as an RAF facility.

“There is one candidate with credibility on these issues and that is me.”