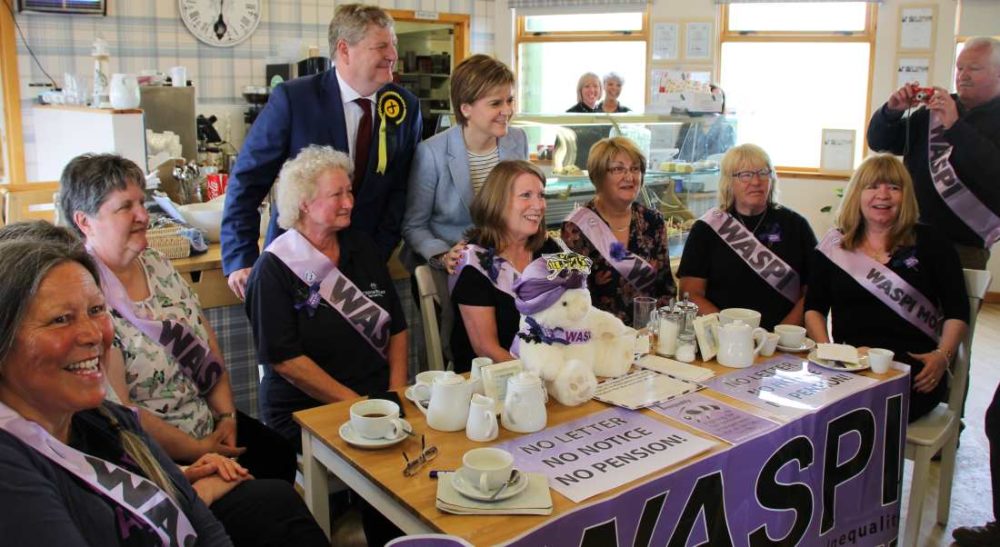 FIRST MINISTER NICOLA STURGEON breezed into Lossiemouth today and charmed dozens of supporters who had gathered in support of her SNP general election candidate Angus Robertson.

The Aroma Café at Covesea was chosen as the venue for her whistle-stop visit to the area with a special invitation issued to members of Moray WASPI campaign.

A special sitting of cakes and tea was laid on with the WASPI group taking pride of place as Ms Sturgeon had indicated a desire to meet them and offer her support to their cause for a fairer deal on pension equalisation plans.

Speaking immediately after the visit Sheila Forbes told insideMoray: “The Moray WASPI Group were delighted to have the opportunity to discuss with the First Minister their Campaign for fair transitional arrangements for all 1950s women disadvantaged by changes to the State Pension Age. “Nicola, Angus and the SNP have been fully supportive of WASPI and it is gratifying that they have pledged continued support. With a possible 4500 Moray WASPI women’s votes up for grabs, we appreciate the significance of our voting power in this Constituency.

“We have had a Pledge of support from Douglas Ross, but await clarification of how this Pledge will translate into action. Like other election candidates, Douglas suspended his campaigning last week, so will be talking to us in the next few days. Jo Kirby, Labour, recently met with us and signed our Pledge, in line with the Labour Manifesto.” Angus Robertson stressed it was important that the First Minister should meet with the local WASPI group, adding: “Thousands of people have been affected by the pension changes and their unfairness to a particular generation of women. The SNP has consistently shown a strong stance to try and solve this injustice perpetrated on them by the Conservatives.

“I am pleased when anybody supports the campaign – even those who have come very late to it – the message should go out that we need justice towards those women and it needs to be resolved. Should I be re-elected to Westminster this will remain to be one of my highest priorities, I have consistently supported WASPI and will continue to do so.”

More on the First Minister’s visit to Moray will follow tomorrow.