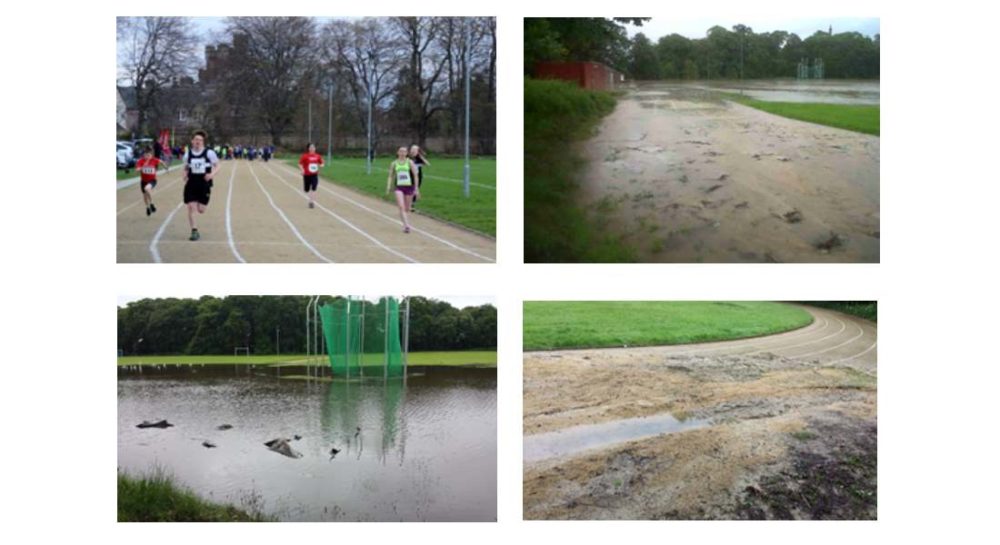 AN APPEAL HAS been made for assistance in repairing playing fields that have been severely damaged by the torrential rain and subsequent flooding last week.

Members of the Elgin Amateur Athletic Club had worked hard and spent thousands of pounds at the Morriston Playing Fields in the Moray town, creating and upgrading facilities that allowed competitive athletics to take place.

However, the fields ended up under water this week – with the club pointing out that while they are as delighted as everyone that the towns flood alleviation system protected homes and businesses, it did nothing for their facilities.

Now devastated members are facing the task of first waiting until the water clears – and then repairing the damage. Speaking on behalf of the club Violet Beattie told insideMoray: “We are pleased that the flood alleviation has saved homes and businesses from being flooded – but unfortunately Morriston Playing fields were under water.

“Having just recently spent thousands on upgrading the long jump and track, we have to wait and see how much damage has been done. It will probably be under water for a while.

“The track was used recently for a competition to showcase athletics in Moray and was looking the best it had done in many years. It was decided at a meeting on Friday to cancel training for a while until the track has been cleared of silt, water, debris etc from the floods and any damage repaired.

“There is never a good time for this to happen but now is devastating – it is the height of the track and field season where athletes train hard for them to attend local and national competitions.”

The club have now issued an appeal for helpers, the loan of tools, wheelbarrows or simple donations. A clean-up of the track will take place each Tuesday and Thursday from 6pm until 8.30pm until it is again safe for young athletes to get back to the activities they all love.

Further details on the type of help required or any offers of assistance can be made to Violet via info.elginaac@gmail.com.