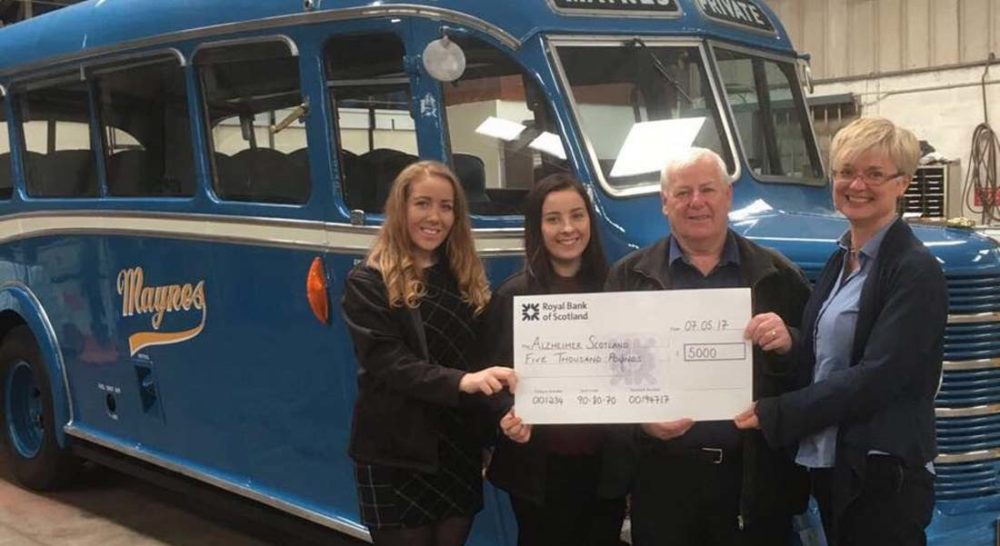 A RECENT OPEN DAY held at coach firm Mayne’s of Buckie to celebrate their 70th year in business has resulted in £5000 being donated to a local cause.

Alzheimer Scotland were selected as the charity to benefit from the 2017 celebrations by the Buckie-based company in order to support more people living with dementia in Moray.

Mayne’s celebrated 70 years of business by holding an Open Day on May 7 by raising the cash through their raffle, tombola, donations on the day and various other fundraising activities.

Meghan Mayne of Mayne’s Coaches said “We are delighted to have chosen Alzheimer Scotland as our charity this year and thrilled that we can support people living with dementia in our local area.

“We, like most families, have been touched by dementia which, I think, was shown by the amount of people who came to the Open Day”.

Wendy Menzies, Alzheimer Scotland Dementia Advisor said “I just want to say thank you to Mayne’s Coaches for choosing Alzheimer Scotland as their charity – £5,000 is a significant amount of money which will be used to support people living with dementia in the Moray locality.

“Local fundraising is vital to Alzheimer Scotland in order that we can continue to help people living with dementia, their families and carers in the local area.”

Anyone who would like to get involved in fundraising in any way for Alzheimer Scotland, contact Elma on emackay@alzscot.org or 07796 673130.

If you have any questions about dementia and of the services available in your area call Alzheimer Scotland’s 24 Helpline on 0808 808 3000 or visit the website at www.alzscot.org