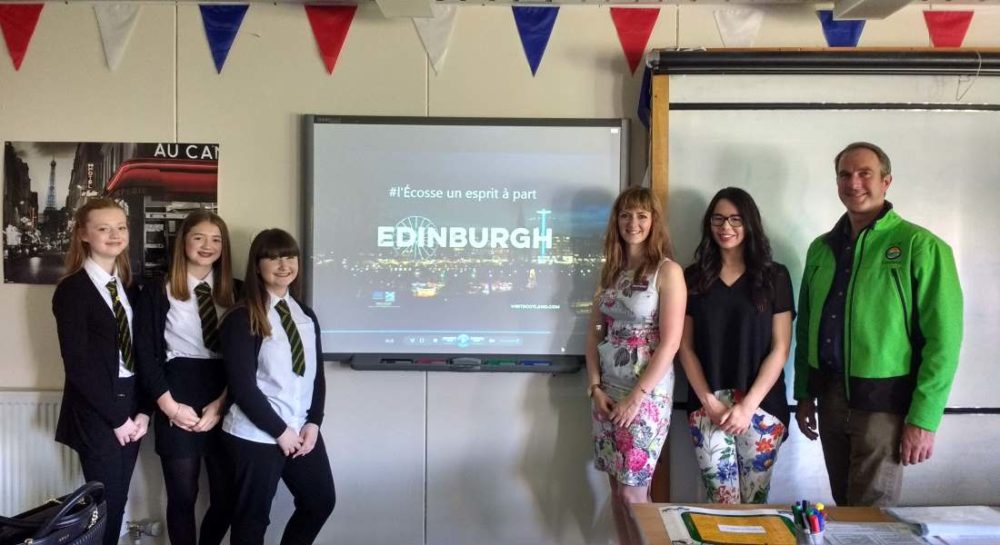 BILLINGUAL PUPILS AT a Moray high school have been trying their hand at creating videos to promote Scotland to international visitors.

The pupils have been adding enticing new content in French to inspirational adverts created by the national tourism organisation.

Staff from VisitScotland and Moray Speyside Tourism worked in partnership with a group of S3 pupils at Milne’s High School in Fochabers, showing them the national tourism organisation’s adverts and inviting them to take part in a competition to create an advert for VisitScotland.

The two organisations are working together to highlight and promote tourism as a positive career choice.

As part of the project, pupils could advertise any event, city, region or itinerary that interested them, but the advert had to be in their own words, in French and in any electronic format of their choice. The winning team would be the one that created the most successful advert for Scotland for French-speaking visitors.

Lindsay Lyall, Principal Teacher of Modern Languages at Milne’s High School, said: “I have tried to create a range of links between our school and different businesses to show pupils the relevance, value and importance of being able to speak another language.

“The pupils and I looked at a range of different options for their adverts but in the end almost all of the groups chose to edit a video clip. They were given a choice of videos made by VisitScotland to edit and they wrote and added subtitles in French that fitted the pictures and the soundtrack. Some pupils really went to town with this task and changed the soundtrack, added pictures or cut up several videos to create their advert.” VisitScotland staff judged the adverts and were very impressed with the quality of the pupils’ work – they found choosing a winner a difficult task and selected two winning teams, comprising pupils Isla Matthews, Abby Watson, Abby Cant and Iona Cameron.

Lindsay added: “Feedback from the pupils has been overwhelmingly positive. All pupils engaged really with, and hugely enjoyed, the project. They particularly liked using the video editing software and being given the opportunity to be really creative, both with their French and with the advert they created.

“Many pupils commented ‘this was the best thing we have ever done in French’. As this is the final topic of S3, and a number of pupils will not continue their language studies beyond this stage, it has been great to finish on such a high point. I would hope to continue this project next year, and I am currently gathering the pupils’ views and staff at VisitScotland’s thoughts on how to improve this in the future.”

The winning pupils were given activity vouchers from ACE Adventure in Dunphail, which they have used to book an adventure of their choice with the company.

Jo Robinson, VisitScotland Regional Director, said: “VisitScotland has been working closely with Moray Speyside Tourism to support the National 5 Travel & Tourism syllabus in Moray Speyside schools, and in partnership with Developing the Young Workforce (DYW) to promote tourism as a career choice.

“2018 is Scotland’s Year of Young People and it is fantastic to see these young people engaging with us. It is important for us to work in partnership with schools and to not only help the younger generation but to inspire them to look at tourism as a great career option and to also to be hugely proud of the beautiful country in which they live.

“Milne’s High School are real trailblazers and have embraced this project. I would like to congratulate them all for their enthusiastic approach and hope some of them would consider a career in the tourism industry in the future.”