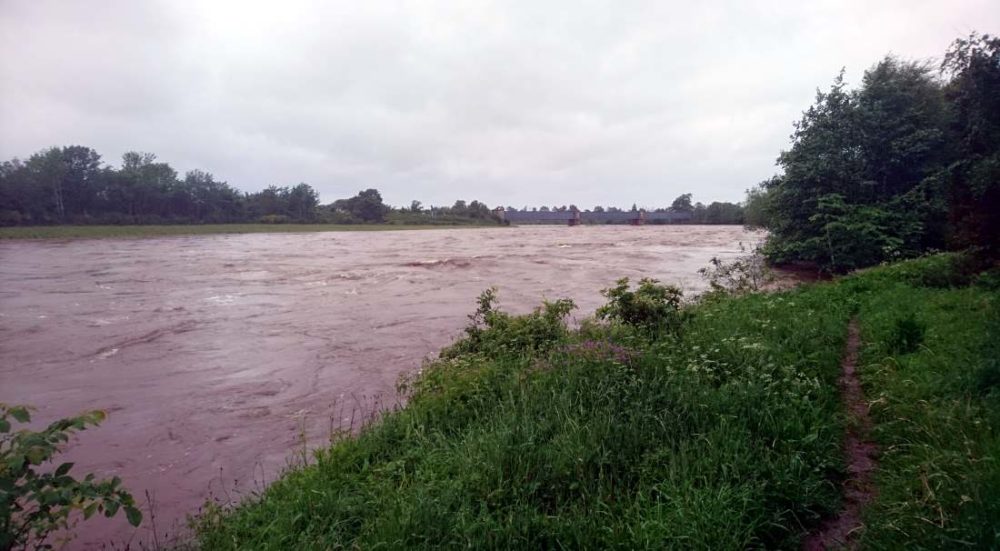 WEATHER UPDATE – road and rail travel in Moray this morning is already suffering from severe disruption as localised flooding takes a hold.

Noon update – The Dallachy landfill site at Spey Bay and the Gollachy recycling centre at Buckie have both been closed because of the prevailing weather conditions.

Moray Council have issued the following update: “Rain has eased and now almost stopped in the east of Moray, but radar suggests it’s still moving west, although reducing in intensity. Water levels in the east are beginning to drop and we hope to start re-opening roads from about 1pm once they are checked for damage.

“The Buckie Burn appears to be stable and is expected it to stay within its banks. Dallas is accessible by road, although there is a closure near Hatton due to a minor field washout. A diversion is being put in place.

“Pumping has taken place in the Lossie Green car park, Elgin to disperse surface water. Levels are beginning to drop across the area, so no further problems are anticipated. Motorists are advised there is a lot of gravel & debris on the roads, which will take some time to clear. Care should be taken meantime.”

Rothiemay Primary is the latest school to close for the day.

Earlier – Trains between Forres and Elgin have been suspended while the route between Rothes and Elgin is reported to be blocked with a detour in operation.

As reported earlier, the village of Dallas is cut off with no access to either end of the village – so far homes have not been breached by flood water but insideMoray readers in the area say it is coming “very close” with many having remained awake overnight.  The primary school will not open today.

Mosstowie Primary will remain closed today say Moray Council, with Crossroads Primary also added to the closed list.  The A96 throughout Moray is flooded in patches – all passable at present with care.  Rain is expected to continue until at least midday today.

Moray Council reacted to the situation this morning saying that the Findhorn and Lossie rivers had ‘plateaued’ – the footbridge of the River Lossie at the Moray Leisure Centre has been closed due to surface water.

The statement added: “In Dallas, where the council’s flood alleviation measures have been completed to design levels, the road was flooded and impassable, but no properties succumbed to water ingress.

“Flood alleviation schemes elsewhere have performed as expected and no properties have been affected.

“However, the Spey is continuing to rise and flooding in Garmouth is likely. Moray Council has already despatched pallets of sandbags to the village. The road to Spey Bay is expected to be closed shortly due to surface water rendering it impassable. Tides in the Moray Firth are not affecting this situation.”

Currently the roads worse affected by flooding are:

B9018 – Keith to Cullen road – several sections under water

B9010 – Elgin – Dallas road near Cloddoch – travel not advised

Miltonduff area, travel also not advised due to water levels

A council spokesman said: “The council’s housing needs team are also on standby should any emergency accommodation be required. Contact number for both these is 01343 543451.”