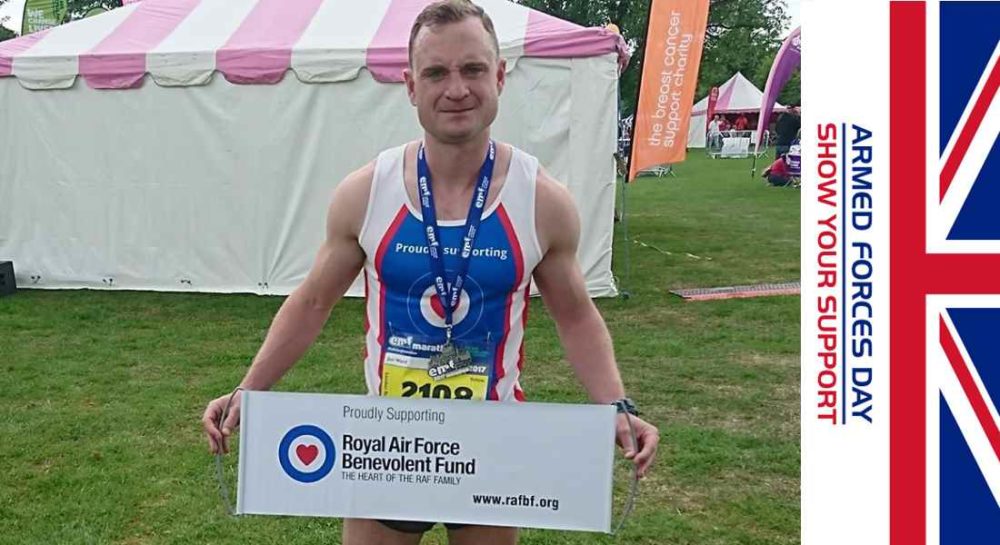 ARMED FORCES DAY on Saturday will see a special event taking place in Elgin’s St Giles Centre – including an appearance to the RAF’s own amazing marathon man Jon Ward.

Corporal Ward is a Logistic Mover at RAF Lossiemouth – and when he is not moving Typhoon jet parts around the world, he is pushing himself to the limit in marathon runs around the country.

Jon is currently on a mission to complete 100 marathons in two years – his 62nd was only recently completed in Perth – and that will included an ’11 in 11’ challenge later this month when he will take on 11 marathon runs in 11 consecutive days. His running is raising funds for the RAF Benevolent Fund.

Plans are being laid for Jon to run an additional marathon on Saturday in the St Giles Centre – on a treadmill this time! He will also host a competition about his running on the day.

Also on hand will be Wave Radio and Moray College UHI – both supporters of the RAF Benevolent Fund with the College handing over a cheque for £1000 raised through charity dinners their catering students had organised.

Wave Radio meanwhile have been supporting the local RAFBF efforts, working alongside their regional fundraiser Zee Fletcher including at the recent Leuchars Open Day.

Chair of Team RAFBF Lossiemouth is Karen Cox who said: “One of the things we love most about representing the RAFBF is the opportunity to help support amazing people like Jon and helping them with their fundraising.

“Jon’s challenge is incredible and I find it amazing he’s managed 62 marathons in this short space of time, I can’t wait until his 100th on April 1 next year.”

Team Secretary Mel Waters added: “Fundraising in the community is a vital part to our work with the RAF Benevolent Fund and it’s a great opportunity to be able to raise the profile of the RAF’s leading welfare charity among the local population as well as veterans and serving RAF personnel.”