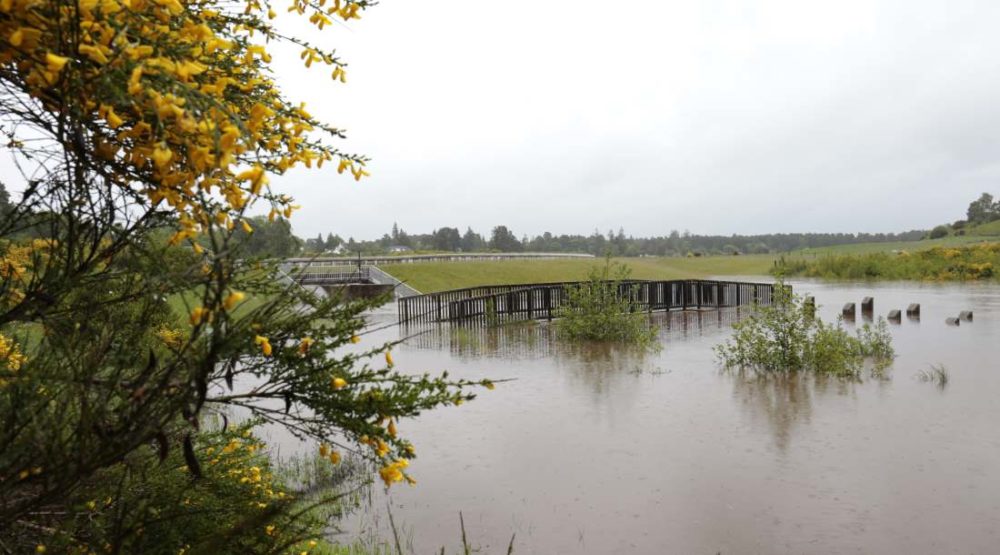 MORAY’S FLOOD PROTECTION schemes were being widely praised after they faced their sternest test yet during a 36-hour deluge.

The constant rainfall hit the region hard throughout Tuesday and Wednesday – and left many facing heartache yesterday morning as their homes came under serious threat.

However, in the event the brunt of the floodwater flowed into parks and fields around those areas protected by the multi-million pound investments over recent years – with experts reassuring people that is exactly how they were designed to work.

Last night regional Labour MSP David Stewart said he was particularly delighted to learn that the flood schemes installed by Moray Council met their first major challenge: “Yesterday, overnight persistent rain across Moray resulted in widespread surface water on roads and transport problems, but thankfully as I understand it no houses have been flooded.

“This was thanks mainly due to the installation of a flood alleviation schemes in Elgin at a cost of £86million and Forres at a cost of £44million. This will indeed be good news for many householders and hopefully these schemes will serve these communities well who have been blighted by flooding in years gone by.”

One part of the region that did not escape was the twin villages of Garmouth and Kingston, where there is no protection against the tidal River Spey. Residents were as prepared as they could be, working together to put hundreds of sandbags into position.

One home was once again damaged, however, that of Garmouth resident David Mackay whose home is located at a lower point than any other in the village – and who faced a £30,000 repair bill the last time the flood waters hit.

Mr Mackay, 67, says that he now expects a bill of a similar nature after water once again poured into his home despite his best efforts. He said: “The water came up so quickly and took only 40 minutes in the morning for it to reach fierce levels.”

Local Fochabers/Lhanbryde councillor Marc Macrae spent much of the day checking on residents of the villages, saying: “The speed of the water on the Spey is a major concern at all times for those living in Kingston and Garmouth and can cause unimaginable damage for those who live there.

“We are grateful that most homes escaped serious damage but my heart goes out to any that did not.”

Meanwhile motorists heading through Rothes faced frustration as part of the road subsided, causing it to be closed yesterday morning.  At Dallas Moor on the Dallas to Knockando road, resident Susan Chadderton said that troubles on the Rothes road also left her cut-off completely: “Our access track was blown out by excessive run off from recent clear-fell carried out by Forestry companies on behalf of absentee landowners – overwhelming the small burn crossing.”

Residents are expecting repairs to be undertaken today.

insideMoray would like to thank the many, many readers who kept us informed throughout the crisis, providing videos, images and updates ‘on the ground’ – and proving once again the value of a community taking charge through their own news service. In total, over 25,000 individual readers monitored the situation through our site while the Facebook ‘reach’ of our updates reached over 200,000 on social media.