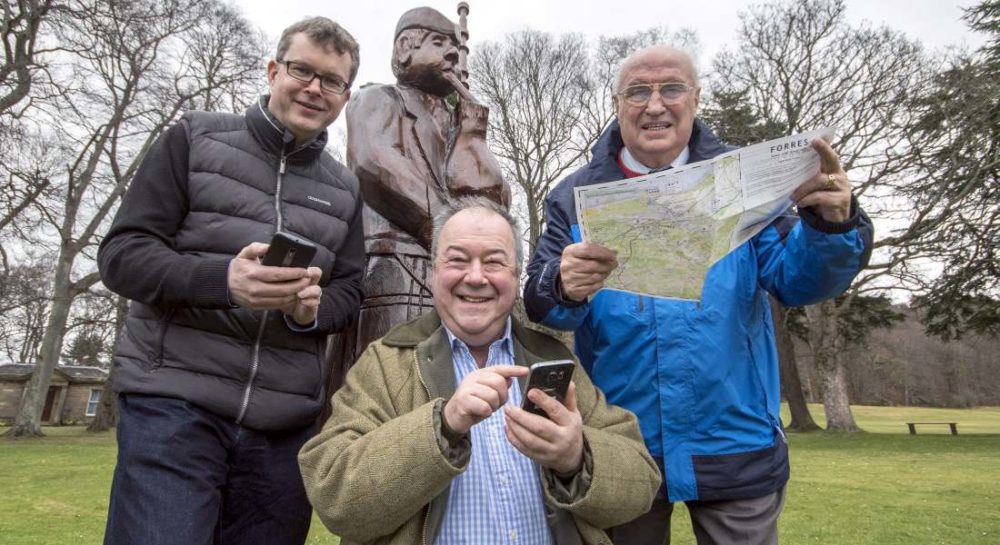 VISITORS HEADING FOR the European Pipe Band Championships this month are being offered a piece of modern technology to ensure they miss little in their visit to Forres.

The Piping At Forres organisers have commission a free ‘Walking App’ that will help in exploring the heritage of the town and its people through their mobile devices.

Launched ahead of the event on June 24, the interactive app provides commentaries on all the local attractions, explaining their history and importance to the Moray town.

Joanna Taylor from Piping At Forres organiser Forres Events Limited explained: “We are delighted this app is now finally live.

“With an interactive map, both audio and written commentaries and great photographs, it provides a very easy to use piece of technology and includes a trail map which guides the user around the town highlighting key locations such as the Town Hall, Sueno’s Stone, the Falconer Museum, the Old Longview Hotel and the. Whether you are a visitor to the town or a local resident this will give you insights about the town that will fascinate our visitors.

“If you complete the whole tour, it takes an hour and we hope that people who visit Piping At Forres will take the time to download it before coming to Forres. Then, as well as enjoying the Championships, they will also be able to take in the many other interesting landmarks that Forres has to offer.

“The aim of the app is to get people, whether they are locals or visitors, to enjoy moving around the town as they learn about the long and varied history of the town, its sites and colourful characters.

“Whilst the app is being created on behalf of Piping at Forres, it’s not just going to be available on one day, our intention is that it will keep delivering benefits for the town over time and can be added to and developed even further.”

The app itself was created in Moray by ‘Openbrolly’, for whom director David Sim said: “Right from the start we’ve built something that is easy to use and easy to update in the future with new walks and updated information.

“It is an exciting opportunity to be able to work on an app alongside an event that will bring so many people to the town. The app will take visitors a little further afield into the town and allow discovery of what it has to offer.”

Helping in the research behind the new product was Paul Johnson who said: “Forres has a fascinating and long history.

“I am used to telling some of its story to our visitors at Carden Cottages but I have learnt a lot more about the area. I am sure the app will be of interest both to those who live locally and those who come to Piping At Forres as visitors from outside the area.”

This year, Piping At Forres, which is supported by EventScotland, part of VisitScotland’s Events Directorate will be held on Saturday, June 24 in Grant Park, Forres.

The event not only includes world class piping, Highland dancing and the World Tattie Scone Championships but also has a food and drink village, a craft and retail village, bars and family attractions such as funfairs and new to this year an interactive science tent.

More than 100 pipe bands compete in the European Pipe Band Championships, in front of a crowd of thousands, making it the biggest ticketed one-day event in Moray. It has been awarded over nine out of 10 in feedback each year, and in 2016 was again shortlisted for Best Event in the Highlands and Islands Tourism Awards.

The app can be downloaded via the Piping At Forres website or from the Apple iTunes, Google Play and android app stores.