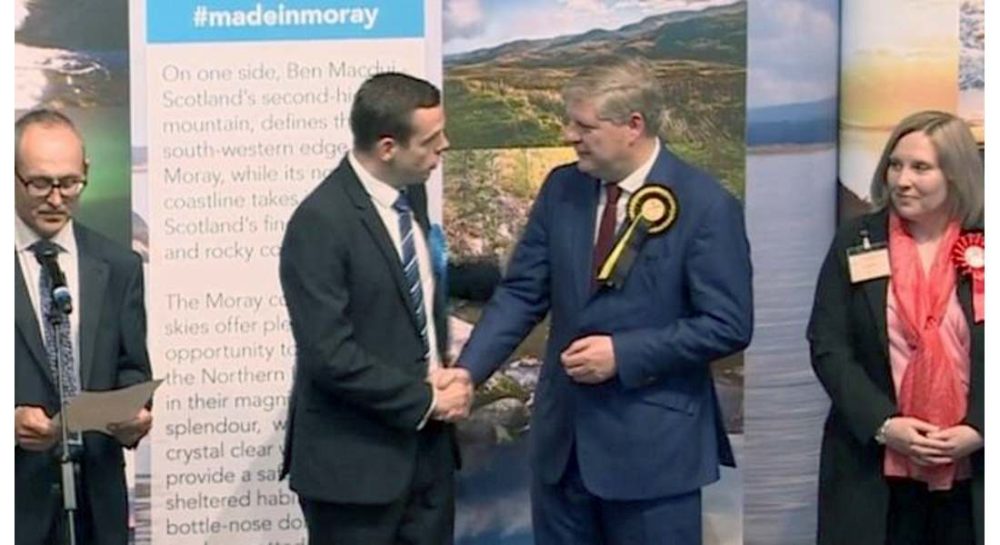 MORAY’S NEW MP has called on our community news pages to reach out to all constituents in Moray with a personal pledge.

After grabbing just a few hours sleep after the momentous general election result was announced at the Elgin Town Hall in the early hours of today, Douglas Ross MP expressed how honoured he was to have achieved his main political ambition.

Having overturned a 9000+ deficit from the 2015 general election vote, Mr Ross goes to Westminster with a majority in excess of 4000.

“Having fought the Moray seat at several elections it has always been a personal ambition to represent my home area in Parliament,” the new MP told insideMoray, before adding a tribute to his opponents after what was a tense campaign.

He said: “For me to be successful, however, others were not so fortunate on this occasion. Jo Kirby and Ann Glenn were excellent local campaigners who contributed a lot to our election here in Moray.

“Angus Robertson has also been an excellent MP for this area since 2001. No one could question the contribution he has made to politics locally, in Scotland and at a UK level. I wish him and his staff well for the future during what must be a difficult time for them.”

Speaking directly to everyone in Moray he continued: “I also want to thank the people of Moray who entrusted me to be their MP at this election.

“I don’t think there can be a greater honour in politics than to represent your home area. This is a job I commit myself 100% to and promise to work for everyone in Moray to get the best deal for local people, local communities and the entire Moray area.”

Douglas Ross MP has agreed to provide monthly updates from Westminster via insideMoray to ensure constituents are fully informed on events that affect Moray.