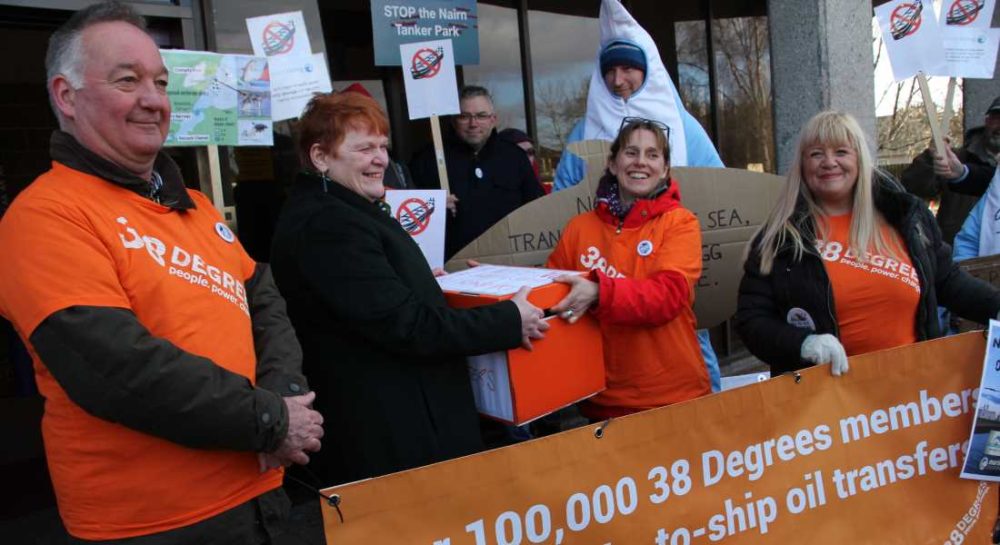 THE CAMPAIGN GROUP seeking to halt plans for ship to ship oil transfers on the Moray Firth have said they have information suggesting that both the Westminster and Holyrood Parliaments were misled.

Cromarty Rising insist that MPs and MSPs were given incorrect information in relation to the application by the Port of Cromarty Firth and their licence application.

An 18-month long battle has been raging between campaigners from communities throughout Moray and the Highlands who believe the establishment of the facility would cause catastrophic damage to the region.

The Scottish Government has consistently claimed that it was not formally consulted about the application – however, documents obtained using Freedom of Information (FOI) show that a legal and valid invitation to consultation was sent to the Head of Marine Scotland Licensing Operations Team, on behalf of the Scottish Government, in December 2015.

Documents also reveal that reports were duly compiled by the Scottish Government as part of a draft response. Subsequently, Transport Scotland Ports and Harbours staff advised Marine Scotland not to respond to the consultation.

“Scottish Natural Heritage and the Scottish Environment Protection Agency formally responded to the consultation, while Marine Scotland was made aware of the proposal through informal contact by the Port of Cromarty Firth.” Cromarty Rising point out that the consultation was issued not by the UK Government but on behalf of the applicant, under the instructions of the UK Government, in accordance with the law. However, they insist that It is not true that the contact with Marine Scotland was informal – a formal invitation to comment was issued to Marine Scotland in exactly the same form and on exactly the same day as it was issued to SEPA and SNH.

Only the Scottish Government chose not to respond, so the carefully chosen words of the press statement, although partly true, give a misleading description of the actual situation.

Commenting on their findings a Cromarty Rising spokesperson said: “Paul Wheelhouse, the Scottish Government Minister for Business, Innovation and Energy, in a statement to the Scottish Parliament on May 2 this year, failed to include key parts of the consultation process which had in fact already taken place.

“He failed to inform Parliament that a legally correct, formal invitation to consultation – with full supporting documentation – had been received by the Scottish Government which actually followed the requirements of the regulations to the letter.

It was a situation, Cromarty Rising claim, that was repeated in February 2016 in the House of Commons, when Ian Blackford MP asked if Marine Scotland, representing the Scottish Government, had been consulted in the proposed ship to ship transfer plans.

Cromarty Rising say that once again that was strictly true – but gave the strong impression that Marine Scotland was not consulted, which was not true.

He went on to note it was “a serious matter not least because of the potential threat to people in my community of ship-to-ship transfers taking place, and of the Scottish Government not being adequately consulted on their responsibilities for environmental protection”.

The Cromarty Rising spokesperson said: “Once again, key parts of the consultation process which had in fact already taken place were omitted.

“However, as a result of the seriousness of the parliamentary exchange, where the term “economical with the truth” was used, the Secretary of State for Scotland undertook to perform an investigation.

“The evidence, revealed by documentation obtained under Freedom of Information, is clear – the Westminster and Scottish Parliaments have been misled, consequently communities and businesses have been misled.

“Cromarty Rising concludes that the deliberate decision not to respond to consultation is a failure by the Scottish Government in the protection of what is possibly Scotland’s best known Special Area of Conservation (SAC).

“The Inner Moray Firth is designated as an SAC owing to its bottlenose dolphin population and subtidal sandbanks.”