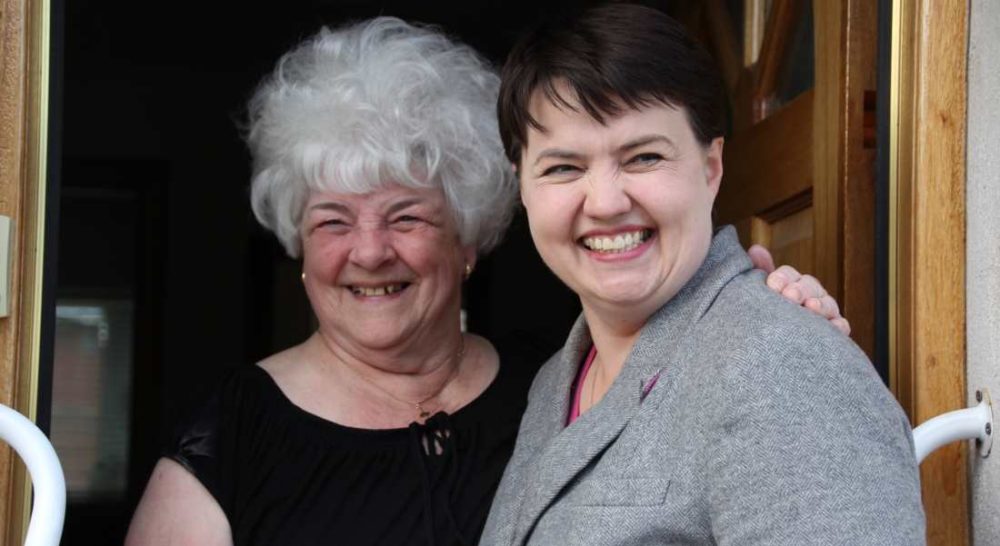 THE IMPORTANCE OF MORAY in terms of the General Election was again underlined today when Ruth Davidson breezed into the region in support of her candidate, Douglas Ross.

Having met both Nicola Sturgeon and Ruth Davidson this week, here at insideMoray at least we are left in no doubt that if pure energy and passion where the only deciding factors, it would be a draw.

Ms Davidson’s stay in Moray may not have been so high profile as that of the SNP leader, but it has been much more extensive.

It was during a stop in Forres that she provided insideMoray with an insight into why this seat is important to her party – stressing at the same time that it was one of many that fitted that description.

She said: “We are fighting hard right across the country, but it is seats like this where we know there is a good Conservative support and where we are also saying we can do a job for people.

“We have a candidate in Douglas who is one of the best campaigners we have in the party, he has proved himself at council level and proved himself in the Scottish Parliament. Now he is fighting for a Westminster seat as well and we can see from the response at the doors that everyone knows him and that makes a huge difference.”

Ruth called in at a few homes and was delighted to find a former SNP voter, Mary Lazell, who insisted that she would switch this time around. It is believed that Mary is one of many in Moray who are contemplating doing so – only the final count next week will tell us just how many. The Scottish Conservative leader insists that she is not at all surprised of the apparent trend.

She said: “It does not surprise me that some people are switching from the SNP – we know that there are Conservative voters who have previously voted SNP but what is happening is in seats right across the country.

“I think this is because lots of people who have, yes, perhaps voted SNP in the past and yes, they voted for Independence in the past – but believe now is actually not the time to be driving towards another Independence referendum.

“There are really big questions on a UK scale about Brexit, there are many questions in Scotland about education and things like the police service. None of them are answered by going right back to an Independence campaign.

“I think if I use the saying in Glasgow – Gie us Peace! That is the kind of overriding concern that people have.

“Yes, they understand that the SNP desire independence but what we think they need right now for Scotland is just a bit of time to settle. That is why there are a lot of people coming to us to do a job, to send Nicola Sturgeon a message that now is not the time.” Before we released Ruth to the next leg of her Moray tour, in Fochabers, we asked her to give us a message to anyone in Moray who was still swaying on which way to vote – why should that be Douglas Ross?

“We can work to ensure that the things we need to spend time on in Scotland and in London through Scottish politics are things like education, like the economy – that is what is given our attention, not the constitution.